Due entirely to Jack Wylder -- and y'all -- we have crowdfunded a move from Blogger to a safe hosting site.
Jack is going to be negotiating the nightmare of spaghetti code that is Blogger, and will be moving the entirety of this blog ... sometime along in here.
When it gets moved, we'll leave a re-direct here, and I'll make a wide announcement on my social media and on the North Texas Troublemakers site. Probably make a couple of announcements on the Livestream, too.
LawDog
Posted by LawDog at 4:21 PM 4 comments:

I am in the process of getting my rights back on both books of the LawDog Files, and my publisher has informed me that the publishing house has pulled my books from Amazon.
There is at least one source for "new" copies of The LawDog Files on Amazon, please be advised that I'm not getting paid from any of these sales.
I say again: If you buy new copies of my books from Amazon -- or any other internet site, come to think -- I'm receiving ZERO royalties from that sale.
Please let anybody who's interested know.
There will be new copies of both books coming out in the near future, and I'll make the announcement later in the year.
Thank you,
LawDog
Posted by LawDog at 11:08 AM 11 comments:

Sure as the gods made little green apples, Red Flag laws are back in the headlines.

For the people who think these are a great idea, I have one simple question:
How many people have been convicted of misusing a Red Flag law?
Whatever you want to call it -- "Misusing", "False filing", "Obtaining under perjury", whatever -- a fraudulently-obtained Red Flag law denies the person it was obtained against a civil right. Civil rights that the Government should be bending over backwards to protect.
The first Red Flag law was passed in 1999. 23 years ago. People are people, and someone has blatantly lied to obtain a Red Flag order against someone.
Someone in the last 23 years has misused a Red Flag law to harass someone else.
So. Show me their conviction for doing so.
I know about the time someone tried to get a Red Flag order against the cops, and that doesn't count -- some animals being more equal to other animals, and all that.
I'm talking about Joe Average having his civil rights taken away for a year with a misused Red Flag order. It has happened -- we all know that it has happened -- and I want to see the criminal record of the person who fraudulently deprived someone else of their Second Amendment right for a year.
Any claim of "Well, they're so well checked that it's never been abused" it complete and utter horse-puckey -- I was in law enforcement for 26 years, that isn't going to fly.
Absent a conviction, I will accept the name of a judge who rubber-stamped every Red Flag request to cross his desk, never turned one down, and was removed from office because of it.
If you don't have that information, then your opinion on Red Flag laws means nothing; and you should be ignored.
LawDog
Posted by LawDog at 12:32 PM 17 comments:

Kelly Grayson, whom most of you may remember as Ambulance Driver, has dipped his toe into the wondrous world of self-publishing.
His first anthology (anthology series seem to be a thing around here) launched yesterday.
You should probably go buy it.
(Support starving authors!) 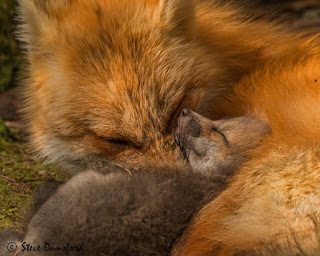 And for something a little less ... conventional: 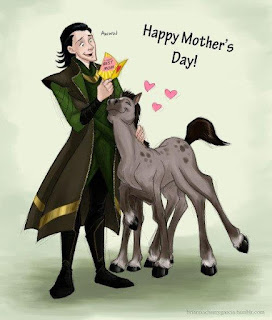 "In my head are a bunch of squirrels. They're hyper-caffeinated, and at a rave. As long as they're all dancing to the same song, it's ok, but sooner or later one of the little buggers loses his glow stick, and it devolves into complete chaos." 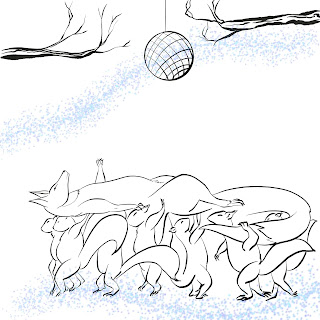 The opening quote was from a panel I chaired at Tulkon last week; I was trying to explain how my mind works, and prepare the audience for the inevitable moment where I would completely lose my train of thought.
I did, as a matter of fact, lose my train of thought. Several times. The audience -- most of whom are familiar with me trying to be extemporaneous from the twice-weekly LiveStream -- laughed and rolled with it.
The quote apparently struck a chord with Cedar Sanderson enough that she decided to illustrate it, above. Yes, that is a fox at a rave, crowd-surfing on a bunch of squirrels.
Tulkon was a rampaging success for us. Very much fun, and lively. We'll definitely be going back. Apparently the Big-Arsed Book Launch Room Party for the North Texas Troublemakers at Tulkon is well on it's way to becoming a legend. If someone claims to have been there, ask them to produce their duck.
Herself was awarded her Master's degree in English this weekend. Yay!
Astrolizards was launched the last week of April, and -- unfortunately -- seems to be performing the worst of the three colouring books. Cedar would like to do a fourth around the story of Squeaks, and I'm tentatively for it, but I don't want her to lose money, so I'm mulling the idea.
Ghosts of Malta, on the other paw, took off. Holy gods, did it take off. I hope we have a couple left after Tulkon, because the National Library of Malta was gracious enough to accept my offer of a copy; and I have to present another to the Maltese Consul-General down in Dallas sometime along in here.
Speaking of presenting copies, I was talked into presenting a copy of it to David Weber during his Guest of Honor Q&A at Tulkon -- I would have been content with a drive-by book-flinging, but he very kindly insisted that the copy be signed. Very nice man, and his wife is a fire-cracker.
We have enough stories for the second anthology -- Knights of Malta will be launched at FenCon -- and we're still accepting short story submissions (anthology[dot]malta[at]gmail[dot]com). If we have enough, we'll launch a third anthology ... sometime early 2023.
Due to the intersection of evil friends and good bourbon, there will be an as-yet un-named anthology revolving around "space cowboys", which we'll be accepting short story submissions for after FenCon, to be launched ... sometime early in 2023. Probably after the 3rd Malta anthology (if we have enough stories for a third anthology).
Speaking of, I need a t-shirt that says: "Any Agreement To Head An Anthology Is Only Binding If I Was Sober When I Agreed To It", because some of y'all are Bad People.
I have a short story I'm banging off to Kelly Grayson sometime today or tomorrow for his up-coming anthology, and another later this week to Jim Curtis for the upcoming Haunted Library anthology benefiting our local library (lot of anthologies going on right now).

My next public appearance (gods willing, and the creek don't rise) will be LibertyCon -- the North Texas Troublemakers will be having another party there, and it promises to be at least as epic as the one at Tulkon. Y'all might want to bear that in mind.
That should be everything caught up. I'm off to write.
LawDog
Posted by LawDog at 8:58 AM 7 comments:

Wow, people are suddenly interested in Maltese history -- I've received several requests for reading material on the history of Malta.

I'd like to take this time to point out that we're still accepting submissions of short stories about Malta. If you have a story that is about 5,000 words to about 8,000 words, is entertaining, and involves Malta in some way, send it to:

You'll need to remove the brackets first, though. Death to spambots!

Anyhoo, on to books about Maltese history!

Any such list has to start with Ernle Bradford, in particular "Knights of the Order", "The Great Siege, Malta 1565", and "The Shield and The Sword".

Roger Crowley, "Empires of the Sea" is excellent, too.

For a more modern book -- World War 2, we've got a fictional book by Nicholas Monsarrat, "The Kappillan of Malta".
Prehistory gets a little dry, but start with David Trump's "Malta. Prehistory and Temples", and then on to Anthony Bonnano "Malta - Phoenician, Punic and Roman".

I'd like to thank Peter Grant for the first five suggestions, and as more come to mind we'll update.
LawDog
Posted by LawDog at 8:22 AM 5 comments:

Ghosts of Malta is live!

Malta.
Alchemists, Saints and Heroes have all made their way to this place, defended its walls, and added to its ranks of ghosts and lore.

Besieged, battered, and bombed, this archipelago has seen every tide of war, turmoil, and more than a few bits of piracy. It's also been the land of courage, resilience, and grace under fire.

Ten authors have set out to bring you tales of the ghosts of Malta past, present, and future. Open the pages and meet the ancient guardians, ghost cats and inter dimensional spies that will be your guide...
LawDog
Posted by LawDog at 9:49 PM 6 comments:

Cover for 'Ghosts of Malta'

Not going to lie, I'm a little thrilled right now. 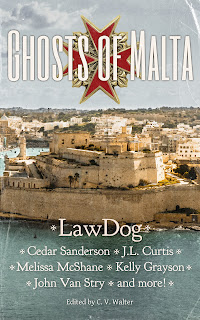 Ghosts of Malta goes live in a couple of weeks, and I've received some questions which seem to indicate that folks think that submissions are closed.

We've still got to fill Knights of Malta, so:

Yes, I am still accepting stories for the Malta Anthologies.

I will be accepting submissions probably until early August, with an eye to launching the second anthology at FenCon.

It must be entertaining, all else is subordinate to this.

It has to involve Malta in some way.

It DOES NOT need to be about ghosts or knights -- those are just the titles.

Submissions need to have your name on there somewhere. Please.

Of course, you should remove the parenthesis, the spaces, and the dashes in that address. (Spambots Must Die!)

We will be doing to the Official Book Launch for Ghosts of Malta at Tulkon -- and the Launch Party is going to be fairly spectacular from what I've seen so far. If you can go, it looks to be a pretty good time.

"It Came From The Trailer Park" is a finalist for the Imadjinn Award for Best Anthology at the 2022 Imaginarium Convention.
Since I have a story in that anthology, I'm pretty tickled about the whole thing.
LawDog
Posted by LawDog at 7:07 PM 2 comments:

Well, another Foolzcon is in the bag.

For those of y'all who remember the old Phlegmfests, this is what took over for Herself's weekend-long parties in 2020, under the steady hand of OldNFO.

It is a weekend for tribe (and authors) to gather and just ... converse. Jonna Hayden refers to it as a "Relaxacon", and there is absolutely no structure to it. Folks bring drink, and food, and lively conversation is had, with much laughter.

And while there are absolutely no panels, I found myself outside on the porch in an informal "No [Deleted], There I Was" not-panel that went over three hours, with much giggling and the occasional Dr Pepper Sinusoidal Lavage.
Saturday evening, I had buried the needle on my People-Meter, was sitting on the unoccupied side of the venue, trying to breathe, and my friend Tom Rogneby stepped out, put a cup of something in my hand, and we sat, sipped cocktails, and watched the Texas sunset.
Kith are people who understand.
Dr Rogneby's Phlogistonic Nostrum:
1 part Buffalo Trace Bourbon Cream
1 part good root beer
Mix, pour over a bit of ice, and hand to vibrating introvert. Sip slowly.

A good time, and a good start to the convention season.
See y'all at Tulkon.
LawDog
Posted by LawDog at 6:42 PM 13 comments: 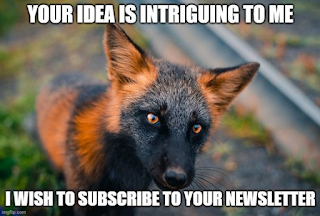 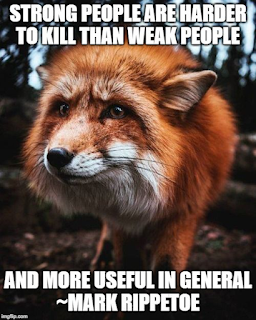 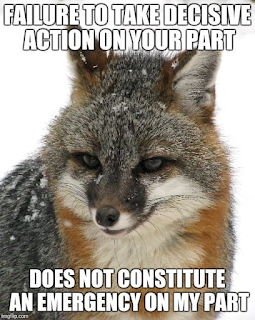 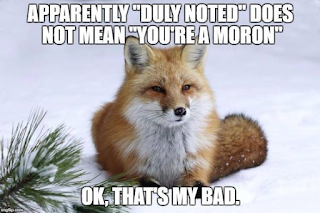 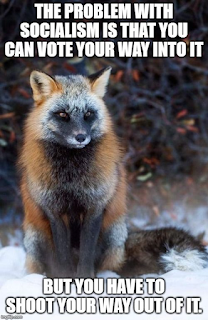