Whats with the foxes?

Folks who follow me on Facebork often ask about my predilection for Vulpes vulpes, which  --considering the number of foxes memes I make -- is a completely valid question. 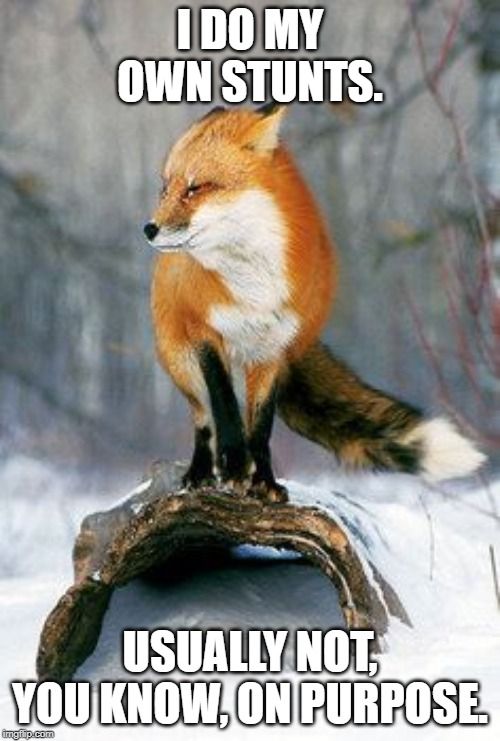 The answer is many-fold.

The first is that I simply like foxes. The are cunning, resourceful, and adaptable; having spread to every continent on this little green dirtball with the exception of Antarctica -- and if you wait until they get the plotting and logistics done probably that frozen hell, too. 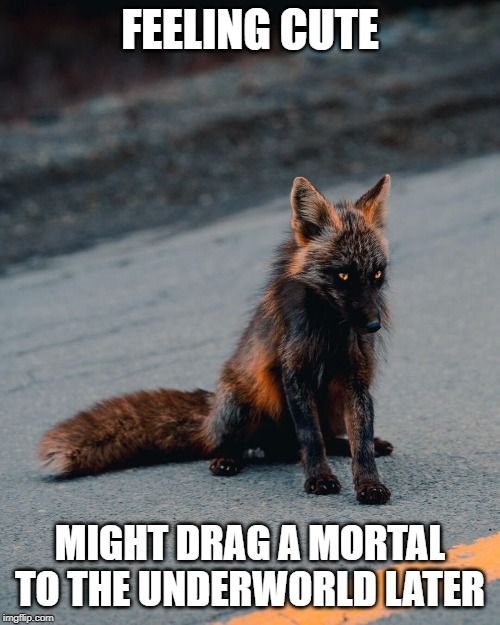 They are efficient hunters, surprisingly good fighters; and are featured in many mythos -- usually as a Trickster figure. 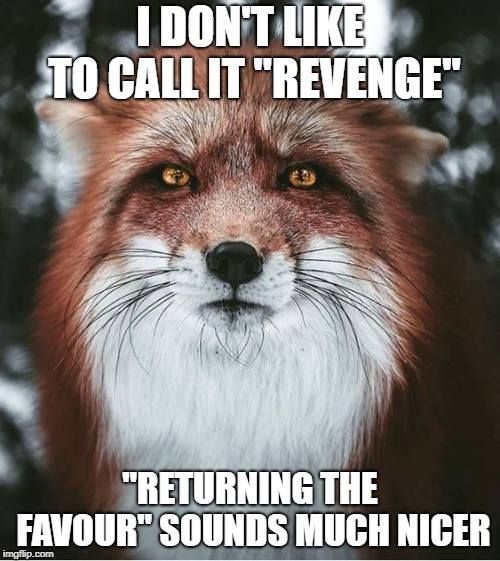 What really endeared them to me was watching a mated couple outside the barracks at Aberdeen Proving Grounds. Every evening the male would come trotting back to the den with a mouthful of dead rodents -- very much with the air of a guy in a red flannel suit heading home after an exhausting day at the office -- where he'd be greeted with a nuzzle by the lady of the den, and they'd feed the pups.

Something about that contented domesticity during a very chaotic period of my life sang to me. 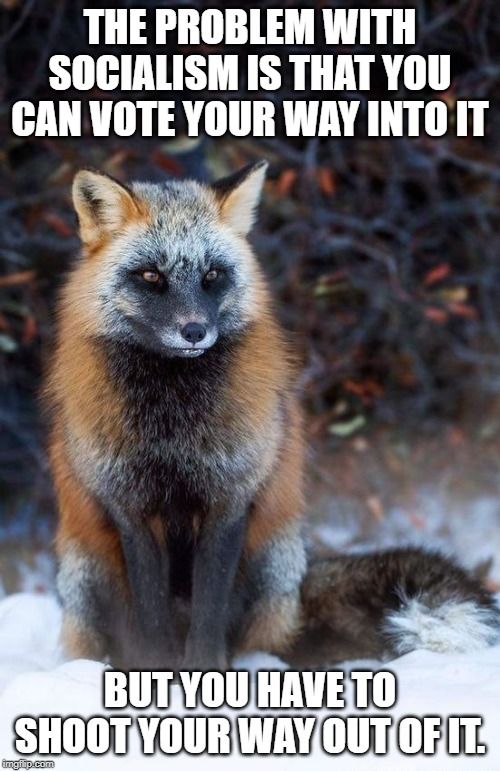 Years later a friend bought a carved soapstone fox totem and gave it to me, and for years I carried that little carving, or others that my mother found, to remind me to be adaptable; that cunning (done properly) was usually better than force; and that when it came down to fighting, to be sneaky, vicious, and unpredictable. 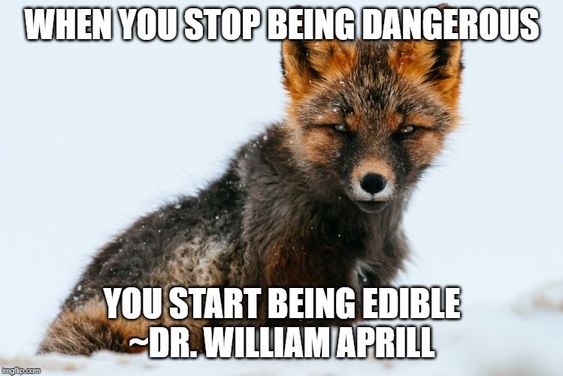 It doesn't hurt, I suppose, that I am a red-headed, slender-framed male of average height, as far as the fox comparisons go. 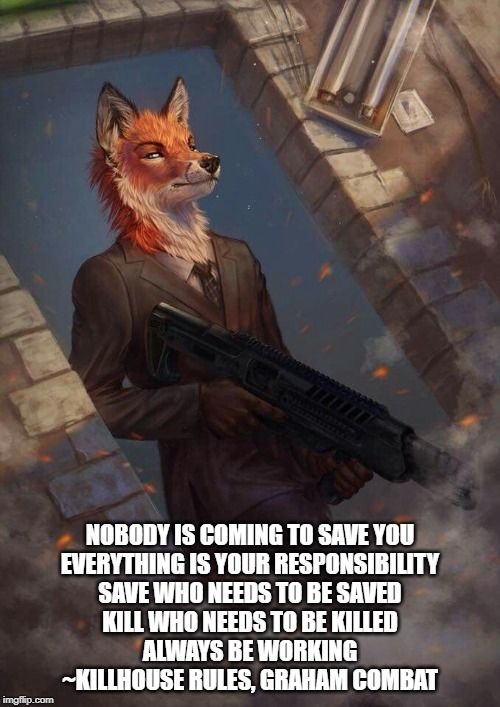 However, the biggest reason for the fox memes is that Facebork is one of the levels of Social Media Hell, and making fox memes keeps me out of trouble with Zuckerborg and his legion of easily-offended uber-minions.

This has been your Monday what-the-hell-am-I-gonna-post edition. Have another fox: 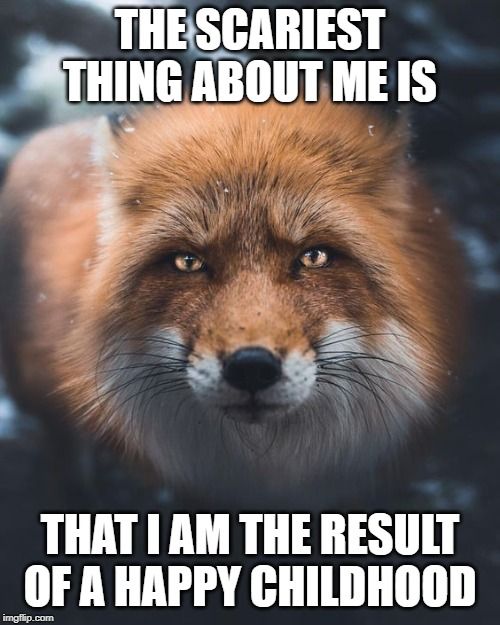 LawDog
Posted by LawDog at 2:39 PM

I do a fair amount of fox themed art. Redhead. Seems inevitable doesn’t it? But lately when I create a fox, my husband is like ‘send it to Lawdog!’

You have the Fox -- I have the Beaver.

Does this remind you of anything? ;)

My namesake was called “The fox of war” for a reason. I hope that I emulate this in my life.
Ulises from California.

If you like foxes, check out Jim McCann's FB feed.

You can thank me later, sv


When were you at APG, if you don't mind my asking?

I suppose if you don't know about the Save A Fox YouTube channel, I am about to destroy part of a day's productive labor.

For example, I'd like to report Grand Theft Smartphone. Suspect had red hair, about 18" tall, probably repeat offender.

Crudniks, for some reason, the screen is cutting off about 20% of the right side of the memes.

Here in Oz they were introduced by man and are a significant pest both agriculturally and ecologically.
However, they have this in their favour... the pleasure in hunting them is directly proportional to the difficulty in so doing. Like so many predator-prey relationships, it is not entirely simple. One can respect a cunning opponent, because it requires one to be skilled in return.

Despite the harm he does, life would be less without him. He is a remaining hint of wildness in a landscape mostly domesticated. When I walk out, this evening, I will hear him bark.

I'm an otter. I have a friend who has, as pets (she has all the trainings and licensing and such), a bobcat named Chloe and a red fox rather appropriately named Sly. Sly likes to bury things in the housecat's litterbox. Yes, she has regular pets, too, and Sly likes to play bury the whatever it is in their litterbox.

If you like anthropomorphic foxes, and can spare the time, check out the web comic "21st Century Fox"
http://www.hirezfox.com/21cf/index.html

Wolves were always my favorite predator, with foxes a close second.

Hibernate through winter (or want to). Check

Heavy and lumbering. Check
But hell to stop once I get going. Check

I love your fox memes. Gorgeous animals along with pithy commentary, what could be better?