The Official DD214 of Jesse MacBeth

Through the efforts of various folks on the Internet, the official DD214 of infamous Chairborne Ranger Jesse MacBeth has come to light. No "additions" via Microsoft products, no crayon scribblings, no bushwa. His Social Security Number has been blanked out, as has the name and address of his nearest living relative. The rest of the information is true and correct, to the best of my knowledge.

As a translating service for those who may be somewhat less than fluent in military speak, kindly accept my services:
Box 4a and b: The highest rank and paygrade achieved is Private, E1. This is entry level, indeed, it is the lowest rank/paygrade possible.

Box 11: Primary Specialty. None. Zip. Zero. Nada. He has never been trained to do a single sodding thing in the U.S. Army.

I think that pretty much says all that needs to be said on the matter. 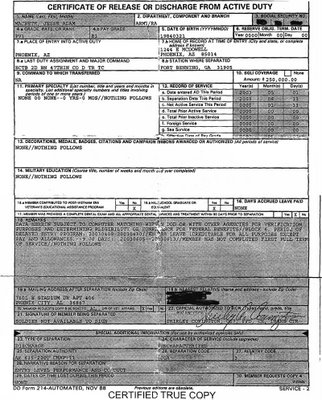 I suggest that you keep your little Squeal butt out of Texas, Jesse. Tampering with a Gov't document is a felony here, as is forgery.

LawDog
Posted by LawDog at 9:42 PM

Here's some details about his discharge, translated:

The discharge authority is AR 635-200, Chapter 11, "Entry level Performance and Conduct". You earn this discharge for unsatisfactory performance and/or conduct as evidenced by:
a. Inability.
b. Lack of reasonable effort.
c. Failure to adapt to the military environment.
d. Minor disciplinary infractions.

Further, you have to fail to respond to counselling, i.e. someone tells you where you're messing up, and you fail to amend your ways.

His re-entry code of 3 means that he cannot attempt to rejoin the miitary without a waiver.

So, we find that we have a guy that signed up for the Army, then couldn't make it through Basic because of "lack of aptitude,
ability, motivation, or self-discipline" (AR 635-200 Chapter 11). As a small business owner, and based on this information, I couldn't justify hiring this guy for any work without constant supervision.

No wonder he's trying to build himself up to be something that he's not. No only is he a wannabe, he's a failed wannabe.

I would have been nice if the web was around in the early 70's.

We wouldn't have been burdened with the winter soldiers...and certainly not John F'n Kerry.

Amazing how the Net keeps the crazies on both sides marginalized...especially those with access to the media.

Get this: Apparently Macbeth DID use his (badly) forged DD214 to get VA benefits in Tacoma, Washington. Supposedly he has a Federal Warrant on the way. He's rumored to be in the San Francisco area. Any readers in the Bay City, BOLO for this sorry sod.

"One month and thirteen days"

Good grief, I've had sneezes longer than that.

Lawdog, don't suppose you could pass THIS poseur off to the person who did the research on MacBeth do you???

He uses the name Eric May, which might be his real name for all I know, though given his particular flavor of moon-battedness I wouldn't be surprised if he also went by G. Fawkes or almost anything else....

It wouldn't be so bad but he defames the REAL Ghost Troop....

You forgot that in the notes he took 9 days of leave in that service leaving 1 month 4 days.