This may (or may not) come as a surprise to some of my Gentle Readers, but I was (am) a terrible RPG geek.

Yes. I have played AD&D. And thoroughly enjoyed it, I might add. (Forgotten Realms rules!)

Haven't developed a taste for the on-line stuff like Everquest or World of Warcraft, though. No room for improvising, adapting and overcoming in the rigid computer-generated worlds.

Anyhoo, somebody sent me a link to a bunch of Motivational Posters for RPG Geeks. There's some stuff in there for you computer gaming types, too. 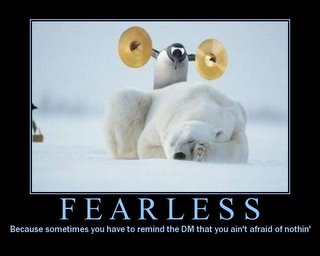 That picture used to be my Facebook profile photo. Love it!

Being a geek just means being passionate about something. Passionate to the point of dedicating whole portions of your brain to it.

The guy that knows all the stock engine options for Ford Mustangs from the 70s onwards is a geek.

The guy that can rummage around in his memory for the THAC0 table for paladins is a geek, even though he upgraded to D&D v3.5 a couple years ago.

The guy that knows all the switches for the GNU C++ compiler is a geek, and probably makes a good living off it.

The guy that knows how the kit his own chainmail and has the rank of "Knight" in the Society for Creative Anachronism is a geek.

The only way you can reasonably expect to achieve a Medical Doctorate is to be a geek.

The guy that knows the muzzle velocity of every one of his many firearms is a geek.

The guy that knows all the statistics for every player in the NFL/NHL/Nascar/etc is a geek, and should probably be reminded of that fact.

It's a perfectly normal thing for a guy to do, being a geek about something. To each his own.

You can even mix your geekisms. Myself, I once wondered, "About how much should a bullpup .45ACP (Super) semi-autocarbine with a 18.5" barrel and an underslung 50-round helical magazine weigh? Would it be reasonable?" Being only semi-serious about the question, I used the generic firearms contruction rules from the GURPS system, and came to an answer of about 11.5 pounds, fully loaded. Now I'm intrigued enough to start wondering how I would really design such a thing.

Now, I know what you're thinking.... "NEEEEEEEERRRRDDDD!"

I don't blame you. But I'm gonna be the one with a bullpup .45 Super carbine some day, and I promised that I'll be extra, extra polite.

That's awesome. I used to be a dwarf pickpocket chemist with two pigeons. It was lots of fun. It's good to hear that someone else enjoys that stuff!

My games were "Vampire: The Masquerade" and, you're gonna LOVE this one, "Nuns with Guns"

I'll have to tell you about being a magic slinging Vampire who could summon the forces of Nature, like Fog, or Rain, or wind to defeat other Vamps or hunters.

Or being Sister Mary Immaculata, a Nun with a Thompson, bvattling the forces of Evil.

I had such a blast.

HollyB, was your "Nuns with Guns" game the "Renegade Nuns on Wheels" expansion for "Macho Women With Guns?" Nuns added vehicle rules. Of course there was the flight expansion, "Batwinged Bimbos From Hell."

I've still got my old Champions rulebooks on the shelf behind me, even though I haven't played in years.

By the way Lawdog, World of Warcraft is more flexible than you'd think.

BryanP,
Bingo! Bubba, that's the One! I haven't played in a loooong time but it was sooo much fun. Just creating characters was fun.
I've still got my beautiful green marbled dice from Vampire in a maroon velvet bag from Vampire.
Holly

me too dog... it's just impossible to find a group to play with nowadays... everyone is on the internet...

I love that picture but... how the heck is a penguin going to get to the arctic circle?

"how the heck is a penguin going to get to the arctic circle?"
From the cymbals, I'd say he got on the wrong bus when Band Camp was done.

fyi, penguins have been transplanted to the arctic.

I have a copy of the above picture... and the caption reads "Every day do one brave thing...then RUN LIKE HELL!!"

Hey Dog, do you have any idea where to find that image? I'd love to have one hanging in the living room. Right next to the bookcase with the gaming books in it.