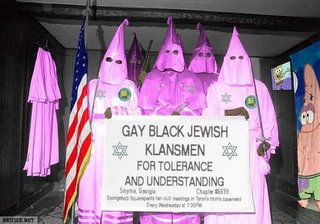 I shamelessly lifted this picture from a Forum post of Xaviers.

I snickered for half-an-hour after seeing this, so naturally, I thought of my Gentle Readers.

And I have no idea why this is picture kicks over my giggle box (to quote Lady Tam). As we have established in the past, my sense of humour is a little ... squirrely.

Now that is the funniest thing I've seen in a long time...shades of Blazing Saddles

So, if they don't burn a cross, what do they light on fire?
I'm almost afraid to ask...

My first thought when I saw it (after I was able to stop LMAO) was a skit from the Dave Chappell Show - "Black White Supremist".

Good stuff, LD! Thanks for the giggles. :)

Shouldn't you be addressing your "Gentile" Readers?

I gotta steal this one..even if you are the law

That is a double click on my giggle button, for sure.
I'm stealing this and will post it.
Thanks.
Got here from Guyk

Found you via Guyk and I'll be back.

Damn that is FUNNY!

Ever seen the pic form the sixties with Bobby Shelton up in front of a large flamign cross talking about how the blacks are so fearful that none are within 20 miles that night and rightdown front is a klansman in full garb with hhis hands hidden by his rob but 2 barefoot black feet sticking out? Hilarious. I don't know if it was 60's photo magic or real but i laughed until I cried.

Similar, but not quite as funny, are the liberal Jews who say that Israel is not a legitimate Jewish entity and does therefore hold any moral claim to protect itself.

I wish I were making that one up.

I love it that their mascot seems to be Patrick from Spongebob Squarepants.

So, which one of them is the Brigadier-Captain?