What's the Latin word for 'Northwomen'? 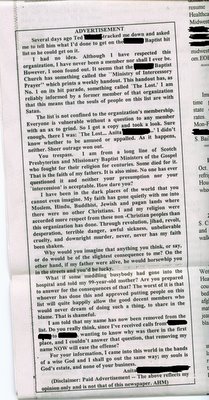 Mom didn't tell me that she bought an advertisement in the local paper.

Personal details have been blacked out, due to me being a paranoid whatsis.

Goodness gracious, but the local Shi'a Baptists are having a bad couple of weeks, aren't they?

And the lesson to be learned here, ladies and gentlemen? Mind your own sodding business.

Have I mentioned lately how proud I am of my mother?

*sigh* Blogger won't let me make the bloody page any bigger than that. So, here's the transcript:

Several days ago, Ted [Name deleted] tracked me down and asked me to tell him what I'd done to get on the [Location deleted] Baptist hit list so he could get on it, too.

I had no idea. Although I have respected this organization, I have never been a member nor shall I ever be. However, I soon found out.It seems that the [Location deleted] Baptist Church has something called the 'Ministry of Intercessory Prayer' which prints a weekly handout. This handout has, as No. 1 on its hit parade, something called, 'The Lost.'I am reliably informed by a former member of that organization that this means that the souls of people on this list are with Satan.

The list is not confined to the organization's membership. Everyone is vulnerable without question to any member with an ax to grind. So I got a copy and took a look. Sure enough, there I was: 'The Lost...Anita [Name deleted]...'I didn't know whether to be amused or apalled. As it happens, neither. Sheer outrage won out.

You trespass. I am from a long line of Scotch Presbyterian and Missionary Baptist Ministers of the Gospel who fought for their religion for centuries. Some died for it. That is the faith of my fathers. It is also mine. No one has ever questioned it and neither your presumption nor your 'intercession' is acceptible.How dare you?

I have been in the dark places of the world that you cannot even imagine. My faith has gone quietly with me into Moslem, Hindu, Buddhist, Jewish, and pagan lands where there were no other Christians. I and my religion were accorded more respect from these non-Christian peoples than this organization has done.Through revolution, jihad, revolt, desperation, terrible danger, awful sickness, unbelieveable cruelty, and downright murder, never, never has my faith been shaken.

Why would you imagine that anything you think, or say, or do would be of the slightest consequence to me?On the other hand, if my father were alive, he would horsewhip you in the streets and you'd be lucky.

What if some meddling busybody had gone into the hospital and told my 99-year old mother? Are you prepared to answer for the consequences of that?The worst of it is that whoever has done this and approved putting people on this list will quite happily allow the good decent members who would never dream of doing such a thing, to share in the blame. That is shameful.

I am told that my name has now been removed from the list. Do you really think, since I've received calls from [Location deleted] to [Location deleted] wanting to know why I was there in the first place, and I couldn't answer that question, that removing my name NOW will erase the offense?

For your information, I came into this world in the hands of a wise God and I shall go out the same way; my soul is God's estate, and none of your business.

(Disclaimer: The above reflects my opinion only and is not that of this newspaper. AHM)

LawDog
Posted by LawDog at 1:10 PM

Were we supposed to be able to click on the ad and view the text? If so it is not currently working.

You might need to use some of your famous food bribes to get help from your "Magic Elf Box" repair technician.

I was assured that the text would be readable.

WOOOHOOO for LawDog's Momma! I was able to squint and read what it said.
Now I know where LawDog got his writing abilities. Let 'em have it, lil' lady!

I can't think of anyone else's blog for which I'd sit here with a magnifying glass and read that graphic, but I did so. Go get 'em, Mom!!!

Uh, LawDog, was this a loyalty test? That graphic squeezie, I mean. ;-)

'Dawg,
You was well raised, this proves it. Too few of those Ladies around. She ever needs adoptin', I'm applyin'! Not sure I'm up to the task, but it's a lofty goal.
TOMOQ

Let me get this straight. The Baptists aren't just saying pray for the general "lost", but are actually printing people's names??

(I had to make the offending URL two lines or the blogger comment tool cuts off the last part of the existing image link!)

I assume that there was/is a '.jpg' extension in the filename that you intended to point the image link too? In fact, it looks as if some of the image filename is missing, thus the 'Not Found Error 404'?

Suggestion:
When naming image files, or any file for that matter, DO NOT use spaces in the filename. Instead of spaces, use the '_' character. In addition, DO NOT use characters such as, <'"\()/>, etc. as part of the filename.

No spaces, no 'illegal' characters to confuse blogger.com.

I was able to get to the letter using:

Didn't blow up tho, I had to zoom it up in a picture utility.

In an earlier post, Dog explained that they weren't even asking for prayers for "The Lost" - they were just printing the names of these people.

And hats off to you and your mom, Dog.

Why would anyone spend valuable brain cells and limited bandwidth worrying about what narrow minded Pharisees are saying about them behind their back?
When someone who knows you asks why you're on the list say: "Don't know; ask the Pharisees that made the list."

I hesitate to call her "Mama Dawg", because there's a certain distasteful term attached to that phrase.

Any chance Mom could get a blog too?

Keep us updated on this holy war lawdog.

It's better than any TV show

Your mom is so cool.

"On the other hand, if my father were alive, he would horsewhip you in the streets and you'd be lucky."

It there is any praying to be done, these people better pray your mother doesn't get her hands on a horsewhip.

"What if some meddling busybody had gone into the hospital and told my 99-year old mother? Are you prepared to answer for the consequences of that?"

After reading about Gran, I'm sure the meddling busybody would be the one paying the consequences, and I'd love to be a fly on the wall for that conversation.

Gran--->Mom--->LawDog Got any stories about GreatGran? I bet she was a holy terror, too!

My compliments to Ma Dog (you tell 'em, honey!) and I would be honored to have the Shiite Baptists put me on their list.

Christian & proud of it,but not them,

--The Next to Last Samurai

I am a 'Godless Heathen' according to a local Christian establishment near my home. Never before have I ever had issue with my beliefs until a neighbor invited me attend the local institute of hypocritical gatherings. I politely declined the invitation. When pressured, I answered honestly, stating that I did not ‘share the same beliefs’ as my aggressive neighbor.

Two Sunday’s following; I was greeted with a church bulletin tacked to my door. My first name and my address were listed as a person in need of prayer and spiritual guidance. Since then I have had multiple visitors from this congregation. I have called and visited this church, informing them of their intolerable behavior. A meeting with their Minister and a Deacon was pleasant, until the Deacon started espousing an attitude of being an un-American, that I leave this great country and join with the other terrorists of the world is the only way I should live. Their Minister was quiet and nodding in agreement with the Deacon. THIS was the point when I lost my better judgment. I broke the Deacon’s already disjointed nose. After which I asked if either had ever served in the U.S. Military. Naturally, neither had. I suggested that they re-evaluate the spirit and the meaning of the Declaration of Independence, the U.S. Constitution and the Bill of Right’s. I have spilt blood, mine and other’s, on foreign soil, to protect their right’s to worship as they wish. I have doubly earned that very same right.

The charges were dropped by the Deacon, at great urging by the Minister. A formal apology was placed in the church bulletin and the Deacon stood before the congregation and shared with them his wrong doing and the error of his thoughts.

I've, myself, been a huge fan of the whole clan for many years (going back to the Rysher days- ask LD, he'll explain better than I).

Thank you, LAWDOG, LAWMOM, and LAWGRAN, for holding yourselves to higher standards than most, standing up for yourselves and others when required, and sharing with us your experiences and wisdom with the rest of us to learn from.

All my life, people have seemed to think the "judge not" bit is about not juding what others do. I figure you have to judge what they do sometimes. That's how you know who is a good influence on your kids, and who is productive in society. But it is not for us to judge the condition of their soul... and that's what these people are doing. I applaud your mom for telling them where to shove it. Her relationship with her God just isn't any of their business.

BOY do I like your mom. She reminds me of most of the women in my family...maybe we're related! =)

Law Mom has good company. Wasn't it written somewhere that "They would count him among the criminals" and hung HIM between 2 of them?

According to some, I, personally, being Catholic, am gurranteed a looong HOT time in the afterlife. Ahem.

ooooRAH for mama lawdog. that's as elegant a reaming as i've heard in a long time.
cheers too for "daniel" from another pagan. i like and respect my christian neighbors but my religious beliefs are my own business. happily my neighbors agree with me.

I meant to read this post ages ago when Holly first mentioned it.

This reminds me of fundamental differences I have with the "good" folks in church who are hell-bent to judge other folk.