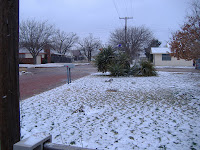 The middle of [deleted] North-by-Gawd-Texas, on [deleted] February the [deleted] Fourteenth, and I've got snow coming out of the sky.

Something fundamentally wrong with that.

LawDog
Posted by LawDog at 4:55 PM

That is more snow than we got with our first "Major Snow Storm" up here in Massholechusetts.

Must be Global Warming... or something.

Gee, too bad. Suck it up, big guy! Last weekend was the first in, what, 8 weeks that we didn't have snow here SE of Denver. So Monday night we get freezing rain, then it snows last night while I'm out to Denver airport to pick up The Spouse, avoiding the multiple crashes along I-225 and the side roads. Only a few inches of snow overnight.Then I had to drive her to work this am. [While avoiding the way too many CA and TX transplants we have here now.] It started snowing again about 2 pm. Did I mention the single digit temps? [The around town/cheap to run car was in the garage for about 6 weeks. Went to start it Saturday. Right. Thank you AAA for your service!]
Good luck on patrol - or even walking. Be well and stay safe. OldeForce

Thanks to the freezing rain last night, my car doors were frozen shut this morning. There's always something that will bring a smile to your face, huh? LOL!!

Yup, that there global warming stuff can sure be tricky.

It can be disguised as freezing tempuratures, snow, blizzards, and increasing ice levels in Greenland.

up here in IL we just had a blizzard and more than a foot of snow.

Two weeks ago we had enought ice and snow to slip and fall... and I did... right under the overhang where the ice water was pouring off the roof of the barn as I was headed in to feed my horse. Yesterday, February 14th, we had some snow in the morning but it was all gone by 10am. Never got above 24F as far as I know.

Does anybody here recall the cartoon where the hippy envirofreak was shoveling snow? This guy had one of those "think snow" bumper stickers on his car... he'd fixed it to read "think global warming".