By way of Cowboy Blob, we learn that your income tax check should be used to purchase a gun.

I was down in the Metroplex area and decided to pop into a large outdoorsy-type store with a fairly nice selection of Things That Go Bang.

Unfortunately, none of which were from the Czech Republic.

How-some-ever, as I was browsing the counter, a lonely FN FNP-40 made Big Puppy Eyes at me.

I successfully fought my wallet back into my pocket, but as I was walking through the rest of the store, I remembered that I don't have anything in .40 -- probably because the 9X19mm has worked rather well for me the past couple of decades.

None-the-less, certain folks (whose initials are Matt G) tend to get kind of a gob-smacked expression on their faces upon seeing Your Humble Scribe carrying a 9mm and start hinting heavily that something in a calibre beginning with a "4" might not be amiss.

And none of the pistols currently in my gun safe have a tac rail. Maybe sometime, somewhere, I'll have a need to mount a laser, light, bayonet, or grenade launcher to my pistol -- and where would I be? 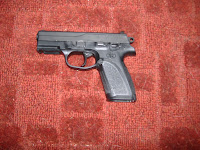 It is used, but it has a nice DA pull, and the SA feels like silk over glass. I'm guessing that the previous owner either dry-fired the spam out of it, or had some kind of trigger job done to it.

It is a bit larger than the compact/semi-compact pistols I tend to favour, but not overly so. It has a solid, workmanlike feel to it -- this isn't a play-pretty, or safe-queen -- this pistol was designed for self-defence and conveys that with confidence.

It'll do nicely for BAG Day.

LawDog
Posted by LawDog at 7:18 PM

Well, I bought a gun a little early for BAG day, and I don't think I'll be getting another for the near future.

It's a Remington 870 Tac-2 (the one with the Knoxx SpecOps stock) for social work. It's evil in all the right ways.

I had to spend my tax refund on a new gun safe in which to house my modest and meager collection. So I may not be able to afford a new gun precisely on April 15...although I'll have enough soon thereafter for a new toy to put inside it.

Probably a four-inch Ruger GP-100 .357 Mag. I don't yet have a DA revolver, and that seems to be the best choice. Unless I find a good deal on a new or slightly-used Ruger 50th Anniversary Flattop Blackhawk in that caliber, or (be still my heart) one of the original three-screw Rugers in good shootable condition...

*sigh* again. Probably should just stick with the GP-100.

Just ordered a Ruger Mini 14 GB and some mags. Sold off an AK and AK toys to buy it. The Mini ain't as sexy as a AR (already have a custom one of those) and it looks like something bubba might have in his car. As my small jurisdiction is inside a large metro jurisdiction and the local guys are under siege I want everything I can get that might give em pause in an interesting noisy situation (From my gun to the vest that sezs police in 8 inch letters on the back) to give them pause before they go to blazing if I get drawn into something on the way to or from work.
The FN is a sweet piece with one of the best trigger pulls out of the box I have felt in a DA Auto. I ain't too thrilled with the forty but then that's way we have a selection to choose from as long as you are comfortable with it. There is no magic bullet or load only good tactics, awareness, and making sure you have a bloody gun.

Good choice for a non-Czech pistol.

Too bad the .45 model isn't widely available yet, though. I never suspected you'd be seduced by the .40 slow and wimpy. We'll have to work on that. Nonetheless, we'll consider it the 'trainer model' and good trade-up material.

In all fairness, I really, really like the FNP's. Really I do. I'm just not enamored of the cartrige that one happens to be.

I started on my BAG project last month. Found something that shoots a cartrige shaped like the .30-06 with a hormone disorder, and it has to be reloaded after each shot. Starts with a 5. My only gripe is I'm buying it 'a little at a time' so I can hide it from SWMBO, because she wants new shades/drapes for the house. That, and the little problem of not being able to shoot it at indoor ranges.

"Maybe sometime, somewhere, I'll have a need to mount a laser, light, bayonet, or grenade launcher to my pistol -- and where would I be?"--LD

Great, LD! This will be the next thing the Loonie Left will try to convince the public our soldiers need in war. And, why didn't GW and his administration have their side-arms fitted with such devices before sending our troops(whom they dearly hate, but say they support) to war?

Grrr! BTW, prayers for my older brother. He just recently deployed back for his 4th tour in Iraq. I doubt he gets to have a grenade launcher on his pistol. Although, I would like to see the holster for that thing...Lol.

Glad my raised eyebrows could induce you to obtain a .40-sumpin' pistol that was built within the last hundred years.

I got a little jump on Buy-A-Gun day myownself. I blundered into a properly big revolver - - large in size. The Colt New Service is a BIG revolver--Not hugeously long, only a 5-1/2 inch barrel, especially compared to the seven-inch-plus magnums, but a BIG frame. This particular one is a U. S. Army Model 1909, and big enough in caliber - -It shoots my .45 Colt handloads into a surprisingly tight group at 25 yards. The DA trigger pull is L-O-O-N-N-G, and somewhat heavy, but really rather smooth. At first glance, it looks identical to a 1917 Colt, but this one's considerably scarcer. It'll make a good companion piece for my New Service in .44 Russian/.44 Special.

It's not quite a hundred years old, but it's getting close. ;)

Beretta 92FS for BAG day and the CX4 Storm is in layaway. Wanted a carbine and a pistol that shared mags.

Does the 1911 I bought in February count towards BAG day?

I've been trying to score a decent example of a Ruger mk II bull barrel 22LR with target sights to make my range work more affordable. (hey anything where you can get 500 rounds for the price of 50 rounds of anything else can't be all bad.) Preferably for less than an arm and a leg.

Anyone have one to sell?

Does it (BAG day) count if the In-laws bought it for me? I needed to borrow a pistol for CHL class last month (for my Texas State Guard drill weekend), and I asked if I could borrow one of my wife's grandfather's old pistols (I was hoping for a 1911). They decided a better choice for me would be a version of the current army-issue sidearm, and I got a Taurus PT-92AF as a "loaner" (I'll be paying them back for the next several months). Now that I know our beloved LD carries a 9mm, I don't feel quite so... inadequate.

Sometimes the Gun Gods smile on you.

While researching the parts needed for my first choice for Bag Day 2007 - a .45 conversion kit for an AR 911 memorial lower I have - I run across a guy with a Box O' Gun that happens to be a Colt factory .45 conversion.

It works, says he, but there is 'something wrong with it'.

As the Oly upper assembly is $600 by itself, and the other bells and whistles were going to be another $600, I can't think of a reason not to buy it if the price is right. He's digging it out for me to look at.

He can even keep the lower to save me all the registration and NICS crappola.

"By way of Cowboy Blob, we learn that your income tax check should be used to purchase a gun."

From the size of the check I wrote them, Uncle Sam can buy a bunch of guns for the troops.

My dear wife did get me a CZ 453 varmint in 17HMR for my birthday a few weeks ago though...

I got a Desert Eagle!

You poor bastard. That desert eagle will both beat you up (it may be gas operated but it still has enough umph to sprain your wrist. Not to mention it weighs a ton and is big enough there is NO WAY you are going to be able to carry it concealed.) and stovepipe on you the minute you need it to work reliably. Therein lies the problem with direct gas operation, as a friend of mine says "they shit where they eat", I.E. the combustion gases impinge on the works and gum them up making cleaning them a very important step.

I plan to use my refund for a gun safe & if I have any left over I plan to get a Hi-Point 9mm or .45ACP pistol as my first handgun.

well..Lawdog, I ended up using my tax return on a wedding ring. yep..I've been domesticated...notice the vacuous eyes? the stupid grin?
BUT!
we went shooting the other day and I noticed a terrible lack of shooting skills in My soon to be bride...so today I bought her A smith and wesson 22a1 target pistol to practice with..hopefully she's enjoy it, and with training (thats next on the agenda) she'll be good enough to take my 9mm Browning Hi power and do what she wants to with it!
(yes I too am enamoured of the 9mm persuasion..)
I figure if she decides to "share" the BHP, it will give me an excuse to buy a Kimber .45!
(go me!)

Easy on the .40 S&W insults folks. A quick Google search will show you the error of your ways. It has as a good a first time one shot down goes the bad guy rate as the sainted .45. And for giggles, A park ranger with a .40 also dropped a man eating grizzly, if it will stop a Grizzly, I think it will stop most human trouble makers.