In light of the spectacular success of the Pink Flamingo Christmas Tree of last year, we here at Rancho LawDog have decided to go with a more traditional approach this year: 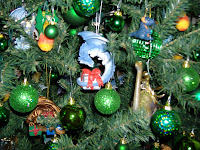 Don't look at me like that -- Christmas Dragons have to be traditional somewhere. 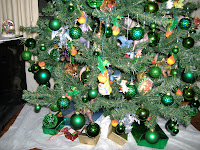 For the more faint-of-heart, we have located *gack* cute dragons: 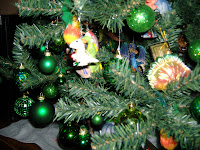 "Normal". Hah! I spit upon your normal! Ptui!

LawDog
Posted by LawDog at 6:03 PM

Chestnuts roasting over a dragon's fire... Hmm, could work.
I salute your creativity and spirit!

I'm with you, LawDog. I too am often, ahem, eccentric. Like offering beef stew instead of turkey on holidays. (MY beef stew--a refinement of a four-star recipe originally from France; I can tell by the way my guests overeat it that it eclipses the mere turkey they expected.)

I play harmonica too, including one the size of a small shoebox with tones so deep I could rent myself out as a foghorn.

"Normal"? After all, where would "Normal" people be without people like ourselves to show what it is not?

Any chance of getting a magafying glass to your magic elves?

I love dragons. Completely and utterly.

We have two trees at my house. A normal tree, and a Georgia Tree. Heh. Go Dawgs ;)

Hey logeyed roman, we had rock Cornish hens stuffed with cous-cous one Christmas. Try it, you'll like it!
LawMom

Those dragons look ferocious and menacing in the most adorable way. Love the green ornaments, too.

There goes LawDog getting all the females' hearts aflutter with his dragons.

Between the uniform and the dragons are you ever gonna let those ladies rest, Lawdog?

Normal is boring and overrated.

Normal? What means this?

Love the tree, LD! If I had room in my apartment (and money to buy it) I'd put up a small tree, but alas... My apartment is pretty much full up.

Great! Love dragons. Will be teaching the grandkids that dragons are good.

Dragons!!!! find you slightly crunchy and good with catsup.....

That's a spectacular idea! I love dragons, so your tree is the best one I have seen in a while. Nice job!

Love your dragon tree! Better than pink anything. =)

The house we bought has so little room in it that our Yule decorations consist almost entirely of artistic arrangements of Mrs. Drang's collection of (Texan)Real Musgrave's Pocket Dragons. (One web site with some here: http://area51collectibles.com/pocdragchris.html)
Yes, they're cute, but so are kittens (which Pocket Dragons have been accused of being, in disguise) so maybe they grow up into something else. At least that's what I tell myself.

Cornish hens with couscous. Yes, I shall try it!

Maybe use food coloring to color them alternately green and red, for Christmas...

Oh, dear Farmist: "Normal is a setting on a dryer. I'll vote for your niece for President.

LogEyed Roman
You want to make your cous-cous with chicken broth and lemon juice, but just slightly less than the instructions say.
Once it's done, I add very thinly sliced green onions, celery leaf (not stalk), and sliced green olives, or pecans (not both; never add more than three things to cous-cous)
If you want it to firm up, add an egg or two, depending upon how many hens you're stuffing. I like to rub the hen down with butter mixed half and half with olive oil and a bit of mustard.
It's not a conventional taste, although you can do that, too, depending upon what you add to the basic cous-cous.
Don't know what we're having this year. Maybe German stuffed bacon...or braggioli....
LawMom

Strange... I've had dragon ornaments on my tree for years. What's so odd about it? *puzzled*

Now... does this mean that Lawmom will be putting up the flamingoes on eBay? I'd love to see the look on my wife's face when she sees a string of lighted flamingoes on the tree...

Hey Ross-
Where on earth-outside of Asia-did you find dragon ornaments? I've had to piece mine out with dinosaurs, which are, after all, mostly merely dragons.
No, the flamingos stay right here. They were delightful, though. You should do that sometime. You can find flamingos on eBay, but also in the various specialty catalogues and craft stores.
Can't make up my mind between my collection of commemoratives, Looney Tunes, or frogs next year. Maybe it's time we had something slightly conventional?
Nah.
LawMom

Love it, just love it. When is some nice person going to make the Ray Harryhausen collection of Christmas ornaments? I want a cyclopean centaur, and Talos, and Ymir and Mighty Joe Young and skeletons - lots of skeletons!!

Not Ray Harryhousen, but if you're into skeletons, take a trip south of the border for Dia de Los Muertes. They have some of the most imaginative, clever ceramic skeleton figures, very creative and mostly humourous in a skewed kind of way. A tree full of them would be awesome!
LawMom

There are strings of dragon and gargoyle lights in the What on Earth catalog.

Ok that last line is going up as my windows live messenger signature for the next while! lolll.