The Paw of Approval. 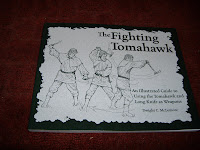 As a holiday gift to myself I picked up Col. McLemore's delightful little book, The Fighting Tomahawk.

If you are interested in the social application of the tomahawk, you could do a lot worse than get this book.

Colonel McLemore has clearly done his research on this tool and his instruction is crisp and concise. Any doubt as to what he means is immediately clarified by the artwork.

There is a brief history, followed by a section on 'hawk design, then the good Colonel dives right off into the good stuff. He discusses gripping the weapon, drawing it and using it in conjunction with a long knife. Multiple sets and drills are presented to provide a solid base in the use of this uniquely American sidearm.

There are one or two bobbles of an editorial nature, but the instruction is first-rate.

This one gets the LawDog Paw of Approval.

Looks like an excellent read, 'Dawg. I'm slightly tempted to order the book, but the price is just a bit steep for such a lark. My part-time security job just expired when the construction project ended, so dicretionary funds are rather curtailed.

Also, I note that McLemore has two other books, perhaps a bit more applicable to everyday life. And, yes, I know it is easier to legally carry a pistol than a big knife in Texas, but I HAVE to believe I'd be more likely to have one of them than to start packing a tomahawk.

I'd probably end up investing at least $115, PLUS shipping for those books. That doesn't even count the near-certainty that I'd end up buying a couple more edged weapons. I can see where this blog entry of yours could easily end up costing me several hundred dollars. More like several thousand - - I'm such a klutz, I'd surely end up cutting myself if I began training with those sharp thingies.

Maybe this'll work: next time we get together for a gun show, bring along the tomahawk book. Then you can drive while I read. ;)

Hey, you never know when, on your way home from the opera, you'll be accosted by a critter with nothing to hand for your defense but the tomahawk on your key ring.

Good read indeed. Too much of the Western martial arts traditions have been ignored for too long. Renaissance era sword, knife, grappling, etc. can be interesting.

Such instruction is more useful than most folks would think. OK, it's unlikely you'll be using an ax or tomahawk in self defense. However, it is one more step in teaching someone that the Homo-self-styled-Sapiens is the weapon, the 'hawk, knife, gun, whatever is just a tool.

The more tools you know how to use, the better off you are in an emergency. For JPG, and worrying about cutting yourself: Just get a large, cheap knife -even an old kitchen knife - and grind the edge off flat. Best if the "edge" is a flat 1/16th of an inch or so. You want to be unable to cut butter with the knife on a hot day.

All this reminds me that I learned the martial arts so I don't have to fight. The more confidence you have in your defensive abilities, no matter what tools you have at hand, the more likely that the Predators will just leave you alone. Remember that the Social Predators have learned to pick their prey.

The more you know how to defend yourself, and others, despite the tools at hand, the less you'll look or act like prey.

The Dog's sixth great half-uncle's tomahawk is on display in the Cherokee museum in Tahlequah, Oklahoma. His grandfather, gg-grandfather, and on back three more generations, although white eyes, were close with American Indian relatives, and were also expert with tomahawks.
So, I guess he comes by the interest naturally; if he comes by the talent as well is yet to be seen. I was never good with one because my wrists aren't strong enough, so we'll never know if I have The Eye or not.
It would be great if Dog does.
LawMom

I never had access to tomahawks, but I did try to throw a hatchet on several occassions growing up. I never could make it stick.

More recently... this year, in fact... I've seen "mountain man" type demonstrations and contests instigated possibly by our local newspaper editor and carried out among high school kids. I've seen photos in the paper where those kids did make a 'hawk stick in the end of the log whether they cut the card or not.

you can also do a brutally efficient job with a sharpened entrenching tool, everything is a weapon if you hold it right.
"gunner"