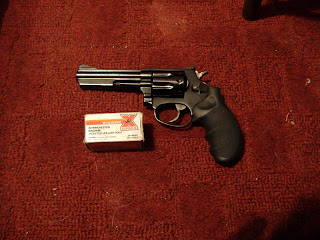 Taurus 941 in .22 WMR, eight round cylinder and a four-inch barrel.

Used Jim March's "Revolver Checkout Procedure" -- an invaluable resource for anyone in the used revolver market -- and it passed nicely.

Double-action trigger-pull is a skosh heavy -- that's to be expected with a rimfire -- but the single-action pull is crisp.

.22 Magnum out of a 4-inch tube is going to produce a fairly nice fireball, I think, but hollowpoints should be decent medicine for bait-stealing turtles, rabid wildlife, and for territorial negotiations with the occasional buzztail or cottonmouth.

I had a similar Taurus years ago, except in 22LR and only a 6-shooter. It was the Brazilian knockoff of the S&W kit gun. It also had a very very heavy double action pull, (I estimate about 12 pounds) but the single action was fine. A very useful item, and I am sorry I no longer have it.

May I ask, does the 22 Magnum achieve velocities significantly higher than a 22LR out of a 4" barrel? Will hollow points expand, for example? I ask only because I never got a hollow point to expand out of my 22LR, after checking about half a dozen brands.

Hm. Mikee, I've had Stingers expand out of a Buckmark before, in .22 LR. Maybe you wer trying too heavy a bullet?

FWIW, .22 WMRFs are actually jacketed, unlike the luballoy copper wash on LR rounds. Also, though they are horribly innaccurate, one can press LR's into service in a WMRF revolver chamber, if you need a signaller or a "GetThatThingOffMeRightNOW" gun.

I also own the 94 in .22lr. It looks like yours except it doesn't have a full underlug.

DA pull is long and heavy, SA is quite nice. Accuracy is reasonable. Everything I read says that trying to lighten the DA pull will make for unreliable strikes.

Hey, even if you miss the critter it'd be easy enough to sneak back up on as it'd be deaf. Those things sound like the Michelin Man tried to re-enter orbit a bit too steeply. Plus, they're a hoot, so they've got that going for them, too.

If I'm going into territory where I might get into a territorial dispute with a cottonmouth I always chamber a shot-shell in my Kel-Tec P11, plus one more as the next round in the magazine.

At 62 yrs now my eyesight ain't what it used to be so I like to think I could at least scare some crawly thing with one of those scatter shots.

I have had one for over ten years, taught my daughter to shoot with it and gave it to her on her 21st bd.

Here's a question for you, Lawdog-- I'm a smallish female (5'4", average weight). I'd like to buy a gun for protection. What sort of gun should I get?

Julie - There is no simple answer to that question. It can depend on your hand size, how often you intend to practice, your budget, etc... That said, a common recommendation for someone who isn't going to shoot a lot is a good .38 or .357 revolver (I prefer .357 because you can shoot .38 through it most of the time, but use .357 for defensive purposes). But you should really take a basic handgun class and try a variety of handguns to see what fits YOU best. As long as you stick with a quality brand and practice with what you get, anything that feels comfortable to you is likely to be a good choice.

Thanks James, I appreciate the tip. I have rather small hands, so I'll be sure to try a bunch to find something that's comfortable.

I bought one for my dad. I love shooting it except for the DA pull.

I wonder if a smith could clean it up or would it mess with that key locking crap.

Julie, I have always thought a 380 was a nice caliber for a lady. My new job requires constant travel and I decided to get a semi automatic to keep in my truck etc, found a bersa 380 that felt comfortable to me. Deciding factor for me was that when I am through with it or gone can pass it on to my daughter also.
ben

Really useful information, lots of thanks for your post.