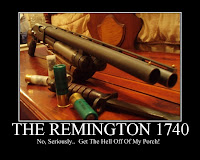 Gentleman over at THR has hauled off and made a whole bunch of gunnies proud.

Nothing says "Room-broom" quite like a double-barreled pump 12-gauge shotgun.

How nifty is that?

I wonder if that could be done with a couple of Remington 1100s?

That looks like the famous "Moe Sizlack Special", named after the bartender on The Simpsons. Moe keeps it behind the bar, just in case of trouble.

That is effin awesome. I love the caption too.

I think they had something similar in one of the "Phantasm" movies as well.

hoo boy... that sucker is gonna have some recoil if they ever shoot both barrels at the same time!

I can just imagine a perp's face when confronted with something like that...hehehe

A great way to get rid of the churchies;)

Love it. Just love it. I don't know if I'd have the nerve to fire it, but I love it.

OMG it's hilarious. DO WANT

knock me right on the keister that would, but it sure is pretty.

To answer a few questions...

Recoil: Darned thing weighs a good 16 or so pounds. Recoil's no problem! Birdshot feels like a .22 and buckshot feels like birdshot from a normal shotgun. I've fired both barrels at the same time with 3" magnum turkey loads. Pushes you back, but doesn't bite you. It's the most fun you'll ever have with a shotgun.

Origin: Originally it was from a videogame called Painkiller. A mix between Doom and a weird cult-version of the book of revelations. (You get to kill satan with a shotgun just like this one!) The first gun you get is, you guessed it, a double-barreled pump shotgun. My 15 year old self got to thinking "Could I possibly do that?" I'd never even heard of Phantasm before, but after I built it someone sent me the link.

What a magnificent beast!

John Satterwhite entertained the folks at "Rolling Thunder" during an SOF convention in Las Vegas with his twinned 1100. Sometime in the 1980s, IIRC.

Turk, that's exactly what I thought of. As in so many movies and cartoons, when a gun is brought to bear, the sound of it being racked or cocked is inserted to the soundtrack. In other movies, it's laughable when Glocks are drawn. With Moe's, it's clearly a double-barrel, yet he's shucking one (two?) into the chamber by racking the fore end.

This makes it all make sense. :)

How do you solve the ejection issues with the left action?

Looks like it would require moving your head back a bit while racking, though.

Left handed 870s are often cheap on the used market.

I couldn't find a used left-handed 870 to work with. Had to buy that part new. You don't have to move your head, the shell ejects clear of you.

I don't get it (the caption, that is). The whole POINT of a weapon like that is you don't have to tell 'em twice.

hehehe, wow, that's a friend of mine! small world.
i've informed him of the blog post, and he's pretty happy to hear that his 1740 is famous :)