So as not to disappoint ...

...My Gentle Readers, I have been attempting to get a picture of the Kittenator -- with mixed lousy results.

So. I have scoured the Intarwebz to find a 'representative' picture of him -- and voila! Not only have I found a picture of a different cat that closely resembles Thing physically, but it is also a stunningly accurate view into his personality.

Behold, by way of ICHC: 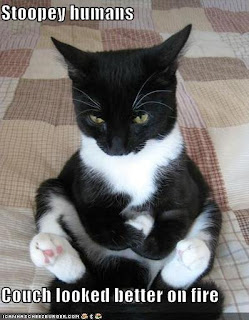 I give you what has to be the twin brother of Thingol the Kittenator.

Looks a lot like our tuxedo cat, except he's never screamed "I can haz artery!" He's just peed on us....

Yee gads, it's an Anime cat!


Young, adorably cute, and capable of inflicting catastrophic damage at will.

You might try a digital camera with either a remote or at least a self-timer.

Leave it sitting where it has a good view of one of his 'spots' until he stops trying to break it (or succeeds), then start turning it on and trying for a picture.

You'll get a lot of 'interesting' pictures - enter 'em in a art contest.

Here's to a handsome beastie in a tux and tails!

almost a dead ringer for my grand daughters kitten.
"gunner"

Hahahahaha So cute! And kind of scarey......ever wonder what can't are thinking??

Looks like my daughter's tuxedo cat, Ozzie. The Oz also has quite an attitude, but then he'll turn around and fawn on you.

Um, Hammer, I want to point out that I was first to call that a turkey leg on Ittycat in comments here way back when. :P

Haha - you certainly have your hands full! Tuxedos are in a league of their own, as far as naughtiness goes.

I lkke the "devil ears."

Thing would have been named Buxton Tux if he had just the smallest portion of dignity.
As to finding his 'spot' he hasn't one. When he's asleep, he's on a deep raspberry brocade antique chair of Nana's, and when he's awake, he's ricochetting.
LawMom

He looks like a gremlin..goodness..don't feed him after midnight...

Our son left home for culinary school, his friends gave him a "going away" present. The siamese kitten from hell. She's not actually mean but she seems to think we're scratching posts at 3 AM. Of course she then turns lovey dovey by draping herself across your neck, purring louder than a Briggs and Stratton lawn mower, and trying to clean out your sinuses or get all your nose hairs.

Reminds me a lot of Zydeco when he was a wee scrap of fluff.

You think they're going to mellow when they mature. The fun starts when you realize this is a cruel, cruel dream.

Can you blame him for running, you're pointing Sauron's unblinking Predatory Eye at him.

Uh... LD, this isn't you in this video, is it? http://www.youtube.com/watch?v=Qit3ALTelOo&feature=related

Reminds me of a tomcat I had once, affectionately known as "Kamikaze Kitty"...

One day Dog, you'll get a pic of that darned cat! Just don't git torn up doing it, lmao!

The cat looks evil. It's always the quiet, smiling ones that rob you and leave you for dead.

I know it seems like yall like cats... and no offense..... but cat pictures make me think of my .17 and the neighborhood feral cats.

We have pictures! Maybe. However, the digital wasn't fast enough, so we had to take them with a snail camera. The results will have to wait until after Nana's 101th birthday next week, so we can finish the roll.
LawMom

Wow-
So much like our boy Harley.
Har's theme song is
"..I Got it!"
You know- anything that moves, falls, crinkles, or exists... must die.
lol

So there I was sitting at one end of my kitchen table. One of my cats sat on the chair on the other end. Ten seconds after I put my foot up on the chair between us, damned if she doesn't bite my second toe. In my indignation, I peer under the table at she, and I swear upon my life she had a self-satisfied smirk upon her face as she licked her nose. Little monster.