By way of Gentle Reader Bill, we discover the latest "gee-whiz, what the [deleted] was he thinking" gadget: Stab-Proof Knives.

Now, we here at The LawDog Files kind of consider a "stab-proof knife" to be somewhat analogous to a "ride-proof bike", a "drive-proof car", a "swim-proof pool", or a "swing-proof hammer", but what the hell, we'll take a look at it. 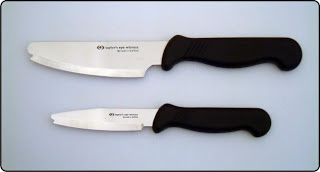 What really set the cat amongst the pigeons were the quotes from the designer in the articles. While a certain amount of hyperbole is expected in advertising, this goes beyond the pale.

Allow me to quote from both of the news articles listed above:

"It can never be a totally safe knife, but the idea is you can’t inflict a fatal wound," he said. "Nobody could just grab one out of the kitchen drawer and kill someone."

First off, the old boy says that you can't just grab this knife out of a drawer and kill someone like that's a Good Thing.

I'm here to tell you -- from personal experience -- the ability to grab a knife out of the kitchen drawer in your rented flat (in a gun-banning hell-hole) on the way to see who the hell is buzzing the door at three bloody o'clock in the morning can be a warm and comforting thing.

Secondly, I take exception to the statement that: "Nobody could just grab one out of the kitchen drawer and kill someone." My name may not be Nobody, but I'm pretty sure I could turf someone from this mortal coil with that widget. And if I can do it, I'm willing to bet that most critters could, too.

Don't get me wrong -- if this over-engineered piece of idiocy floats your boat, by all means: outfit your entire kitchen with them.

Just don't be part of forcing me to use them.

And I will guarantee you that somewhere in Dear Old Blighty, someone with a little bit of power and a whole bunch of ego is thinking it'd be a Damned Fine Idea to mandate these stupid knives.

Thinking that there needs to be another useless tit of a law thinly hidden behind, "It's for the chhhhildren!" banning regular knives in favour of these knives upon pain of imprisonment and felony charges.

Pfagh. England, I knew ye when ye were great.

'Dog, The US Customs department is getting ready to rescind the rulings that exempt knives that can be opened one handed using such devices as spring assists, thumb studs, gravity releases etc. and redefine them all as switchblades. And since most states use the federal definition of "switchblades", they will in effect be outlawing something like 80% of all the folding knives sold in america.
You can read about it here:
http://redinktexas.blogspot.com/2009/06/new-weapons-ban-has-already-begun.html

Wow. That is incredibly stupid.

Either they are so stupid as to believe their own BS, or they expect other people to be stupid enough to believe it... and they may be right.

There is no such thing as a stab proof knife, or a knife that can't inflict a fatal wound. Can't be. Besides which, plenty of folks have been killed without a "weapon" at all.

Um, that could be ground to a right fine point.

Anybody over there ever think of that??

Or a slash to the throat and those not so deep carotid arteries.

Hilinda is right...and for sure, she would know. The title of her blog is "The Swordmaster's Apprentice". And she is one.

Obviously the designer studied rapier and neglected the saber.

If they believe what they're saying, then they wouldn't mind someone trying it out on them. The design might have some merit for someone prone to dropping knives, but you can make a hole in something with almost anything blunt if you apply sufficient force and/or velocity.

Oh, sweet ever-loving whiskers on a rodent... I'm surprised they're not made of Styrofoam. After all, it's safe and harmless!

Also, WV: "ressest" Now I've got a hankering for chocolate.

From an empire on which the sun never set to...to this.

As much as a detest the monarchy and dislike England in general (an american with scot and german blood what do you expect)this just makes me sad. Very sad.

Makes me truly long for the England of old.

I was caught somewhere between laughter and sobbing with these ones. And yes, they're probably going to be mandatory in less than 36 months.

Simple geometry points (aha) out that grabbing one from the drawer, one's arm would be in a good position to deliver a hearty slash to the throat. And that's just the tip (aha) of the iceberg of lunacy that this partially-emasculated device represents.

Personally, I wish I'd come up with it. The designer must be laughing all the way to the bank. At least until his patent's forcibly taken by .gov.uk for distribution as "People's Cutlery".

LD, I agree that a competent knife fighter would still be effective with one of those.

Additionally, if you want a knife not built for stabbing, we have cleavers and Santokus.

Make it idiot proof, and someone will build a better idiot.

Thrust hard enough, and you could bury the bottom knife in that picture quite deeply enough to kill someone.

And you don't have to grind down the point or have twenty inch biceps to do it, either.

I used to have a certain, grudging respect for the Brits.
Those days are done.

Tangentially, I've read that pointed knives are not used at the table in polite society since the 16th century because Cardinal Richilieu was concerned people would stab one another at state dinners.

Reminds me of the Royal Navy breaking off the points of sailors' clasp knives.

As a Brit I can only shake my head in disbelief. I'm back in the country after 11 years abroad and am disgusted at what it has become. Political correctness has gone made. Well apart from the politicians themselves - they've been behaving about as badly as you can get. Not sure if the MPs expenses debacle has reached the US - that makes for some interesting reading.

Heading out again shortly for another expat job - this time in the Middle East. Maybe in another 10 years England will come to its sense but I'm not holding my breath.

Beggars belief that no-one in the 'Elf & Safety brigade has figured out a mugger doesn't need to stab you they can just slash your throat.

Knives, hammers, hatchet, axe, club, gun, cars, rope, etc.
Remember Cicero 2000 years ago in Rome said "The sword has killed no one, it is only the tool in the hands of a killer" we must have a very steep learning curve, and keep sliding down before learning anything. UK politicians seem very comfortable with the concept of sacrificing liberty for security
They will end up with neither.
Paul in Arlington

Every gaming manual I've ever seen said knives are stabbing weapons, so obviously they can't be used for slashing and therefore can't injure anyone :p

Too bad we can't ban the pencil-necked geeks who try to pass idiotic "laws" such as banning pocket knives. It's time to remind those *colons* in Congress that knives are also protected by the 2nd Amendment to the United States Constitution!

Here's the thing...they are not stab proof knives. Applied with a moderate amount of force behind the stabbing action, the point will be pushed in far enough to start cutting...and then it's business as usual.

Somehow, I just can't see Gordon Ramsey using one of these. It just doesn't synch. However, I
can envision him taking a look at this and saying "What the f-----g bloody hell is that?!?"
LawMom

You know, let me think of the three most useful knife attacks I was taught:

1. Slash across the back of the hand to cut tendons and start bleeding (you know, from those big-*ss veins they stick IVs into). This makes it far more like for your opponant to be able to retain HIS weapon, what with the fingers not closing and the slippery grip and all. Then you can KICK him to death if need be.

2. Slash across the face, preferrably at or above the eyes. This provokes an INVOLUNTARY defensive response before it lands, generally aborting his attack, is quite painful, potentially permanently blinding, and (if you get him above the eyes) usually temporarily blinding as the blood runs down. Then you can KICK him to death if need be.

3. "Cut 'is bloody froat!" Executing a draw slash to the side of the neck (preferrably starting just below the back of the jaw), do your damndest to send the blade slinging through the windpipe on the way out. Lots of yummy blood vessels that are, you know, THE PRIMARY HYDRAULIC SYSTEM FOR THE BRAIN. natural defensive action will be to grab the throat where cut. Then you can KICK him to death if need be.

Funny, with knives, I was really only told to use the tip to stab in a few circumstances. Sentry removal, when I felt confident of my ability to get the knife EXACTLY where I wanted it to make brain frappe, and stabs followed by draw cut downward slashes, either starting at the top of the kidney from behind, or immediately below the ribs from in front. letting your opponants internal organs fall out is usually pretty effective. If he's still too sparky for your tastes after this (and I don't see HOW he could be), then you can KICK him to death if need be.

The ONLY thing this knife design might hinder me doing are the viserating stab/slash moves.

This part interests me:

"...and has been tested with “very favourable” results"

Knife control is probably the most illogical forms of weapon control there is (which is pretty damn hard to do, since most of them are pretty illogical to begin with).

We've only been manufacturing knives for around 200,000 years now. Hell, even our proto-human ancestors could manufacture pointy objects to stab things with. Some chimps have been observed using spears.

Give me a rough piece of stone and a flat piece of metal and I could manufacture a knife in a couple of hours. Give me a grinder and I can do it in a couple of minutes. Drop me in the middle of nowhere with just my undaroos and I'd work out a way to make a knife out of pieces of rock within a day or two.

And I'm not exactly Einstein.

We are humans. By definition, we are tool users and makers. It's encoded into our DNA, and no law on earth will change that. So if some cretin wants to get a stabby thingy (aka shiv, shank, or just plain old knife) they can and will. This is reality, and there isn't anything we can do to stop it, except to make ourselves such an undesirable target that said cretin will go looking elsewhere for easy meat.

Interesting article as for me. It would be great to read a bit more about this matter. Thanx for giving that material.
Sexy Lady
A level escort