Richard Daley (sr) voted for who?

Was anyone else shocked (shocked, I say!) about the results of last nights mayoral election in Chicago? 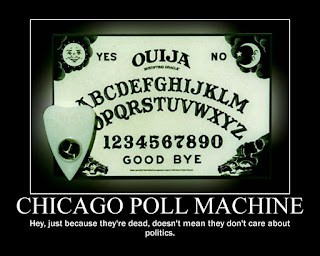 The more things change, the more they stay the same.

Bahahahaha. What a mess.


Or not as the case may be.

When my husband's uncle, a Chicago lawyer, was dying, he commented that he looked forward to many years of continued voting.

No surprise, when Rahm was allowed to run in spite of not being legally qualified, I knew the fix was in...

... and there's a story on the newswire this morning about all the budget troubles waiting for the Rahmhead when he gets in. The Daleys have bled the city dry, and guess who gets to deal with the aftermath?

I wish you hadn't posted that board. It brings back terrifying memories. May God protect us!

The really fun part was the news feature that led off with, "When he announced his candidacy for the office left behind by retiring Mayor Daley, Rahm Emanuel was far from the front-runner . . . . ."

That must be why every political blogger, writer or insider not working for someone else's campaign immediately started talking about no one but Rahm . . . because he was such a dark-horse candidate.

It seems to me that, nationally speaking, a lot of observers are talking about Rahm being elected Mayor Chicago, but few are finding it remarkable that Mayor Daley's brother, Bill, has been appointed to take Rahm's place as White House Chief of Staff.

Ah, but do Chicago's dead vote in alphabetical order like dead Texans do?

I'm curious if the bookies would let you wager on Rahm becoming mayor, or if you could only wager on 2nd and 3rd, and the spread (percentages).
LittleRed1

Hoped for the best, got the worst.

Maybe instead of trying to bring democracy to the MIddle East, we should bring it to Chicago, IL first. It's sure not the Democratic Partty bringing democracy, I can tell you that.

After the ruling by the Illinois Supreme Court.I knew th fix was in.
Al Capone would be proud.

Rahms house in Wrigleyville was given a market value of 1.28 million dollars. For the last many years it was somehow evalued by the tax assessor at 128,000.00.

He has been skipping on nearly 1.1 million dollars of taxable value in property taxes.

Notice on the bottom of page two. Certificate of error applied for.

Here's the incriminating document. Notice the difference between appraised value and market value. Note some discrepancies always exist between the two. But an error of 1000%!?!
http://www.cookcountyassessor.com/Property_Search/Property_Details.aspx?Pin=14184080350000

On a similar note, I read recently that Chicago had to throw out a sizable number of red light camera tickets, when it came to light that the officer who had been signing the tickets, verifying he had viewed the video and that an offense had occurred...had been dead for several years at the time...

Irony is they've been dead for over 80 years.