As part of my regimen for getting my right paw back up to scratch, I have acquired a "therapy ball" which appears to be a balloon full of what is referred to as "granulated pelletised silica" and then stuffed into another balloon.

Were I to guess, I'd say that "granulated pelletised silica" is probably a fancy term for "sand", but there you go.

Anyhoo, it seems to be working a treat.

Unfortunately, Miss Praline has apparently decided that it is, as a matter-of-fact, the very stress ball used by Abdul Alhazred during the penning of his last tome, and there-fore Must Be Destroyed. Utterly. It's for our own good. The Fate of The World, and all that.

I've never before had a Jack Russell Terrier, and the amount of sheer, single-minded focused determination is ... awe-inspiring. This is a level of concentration on one single task that Zen Masters work life-times to achieve -- without success.

There is nothing, not dinner, not her (formerly) favourite toy, not the new puppy, nothing capable of distracting her from her self-appointed goal of destroying the menace that is my therapy ball. 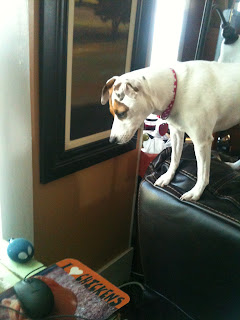 Whole bunch of folks ought to be thanking their various and sundry gods that no-one saw fit to give Miss Praline thumbs, because -- near as I can tell -- the lack of opposable thumbs is about the only thing preventing the Reign of (Mostly) Benevolent Dictatrix Praline.

Which -- come to think -- might not be all that bad compared to what we currently have.

She's on the couch! That's where you started to go wrong...

The thought of a Jack Russell terrier with thumbs is sobering. The world would bow to their strength and determination.

why would she bother with thumbs ? She has you to fetch and step for her LOL

Do you realize what you are saying?
Thumbs?
On a Jack Russell Terrorist?

Ours is laying peacefully on the couch...(He owns the couches!!)

We are all fair game to Jack Russell's!!!

The focus of a Jack Russel terrier is fascinating to watch. It's like the fate of the world is on their shoulders, and they are NOT going to shrug.

I'll bet they'd make excellent Green Lanterns. Except for that thing with the thumbs.

Be afraid...be very afraid. She thinks that petting her is all the therapy your hand needs.

Certainly more stable, dignified and loyal to the Republic than what we have now, at any rate.

Definitely better than what we have now. When was the last time a Jack Russel bowed to ANYONE?

LOL, THAT would be scary (but interesting)... And yeah, FOCUS is what she has, in spades!!!

"I've never before had a Jack Russell Terrier, and the amount of sheer, single-minded focused determination is ... awe-inspiring."

Ever seen a Border Collie work sheep? Now THAT is awe-inspiring.

Not that terriers are any slouches in the 'determined focus' department, as you've found -- one must have rather more focus than good sense to chase rats, weasels, badgers, and other vermin down their burrows and then kill them there.

She is certainly on task there. I'm afraid the object is doomed

A Jack Russel with thumbs could likely take over the world.

Hope you are on the mend soon. If gets too man lay down and wait for the granulated pelletised silica-man to bring on a nap.

Jack Russell Terriers are like potato chips, you can't have just one. I attended a gathering of JRT owners last year and all had at least two or three.

Hope you've progressed past needing i t for your therapy before she accomplishes her mission!

(In fact, when you don't need it anymore, that'd be a pretty stress-relieving thing to watch, wouldn't it?)

Your dog see's you using it all the time..and your concentration...
Thus, it must be something she MUST HAVE or Destroy! How Dare that ball take attention from her/him!