Oh, you've got to be kidding me. 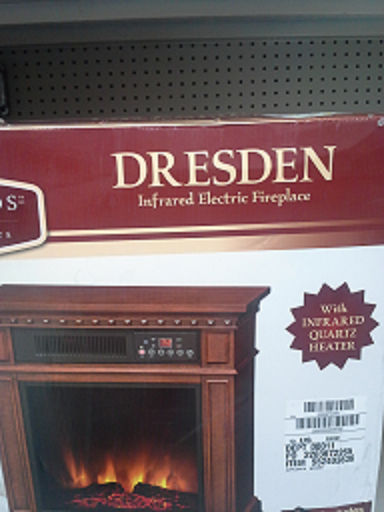 Anyone who would name a fireplace after a firestorm that turned a major European city into a furnace for 25 000 souls, and burned 1600 acres into ash and rubble either slept through history class, or is attempting to exercise what he (or she) thinks of as "irony" and thus should be struck about the head and shoulders with a semi-fermented haddock until unconscious.

LawDog
Posted by LawDog at 7:00 AM

Y'see, Dresden is famous for many other things besides the firestorm - fine china, architecture (admittedly, much of it destroyed by the infamous air raid), pre-WW2 modern art, and so on. It's entirely possible the manufacturer named that fireplace for one of those elements rather than the air raid.

Of course, one's mental association of 'Dresden' is often with 'air raid' or 'destruction', so I can see how that might create ye olde cognitive dissonance.

Heh, Peter beat me to it! I bet the manufacturers were trying to evoke images of dainty Dresden porcelain shepherdesses residing on the mantel. That's my guess, anyway.

I'm with you, Lawdog, I think they haven't a clue!

Dresden wasn't a firestorm, Dresden was (and still is) a place. That admittedly got the conventional equivalent of Hiroshima heaped on it.

(Or maybe the fireplace explodes and levels the whole suburb. Who knows).

Strange, I saw "Dresden" on the firebox and my mind went Supernatural... as in who in Hades would trust Harry Dresden to create a fire box that runs off electricity?

I'm glad I'm not the only one that sees the Old Yeller dog food at Krogers and things "hey. . but didn't they. . ?"

Years ago, Mitsubishi ran an ad campaign for their cars which involved zero down, zero interest, and zero something else. The radio ad had some guy screaming "Zero! Zero! Zero!". My father commented that it sounded awfully like "Tora! Tora! Tora!", and was perhaps, not the most tactful ad campaign ever created. We still haven't been able to decide whether it was just youthful cluelessness, or Jerry della Femina style humour (see "From those wonderful folks who brought you Pearl Harbor").

Finding this funny is one of the many reasons that if there is such a place, I'm going straight to Hell should I ever shuffle off my mortal coil.

You know... I HAVE seen custom fireplace inserts for those wanting a little more panache than just the standard fake logs. I think my favorite was the Dia De Los Muertos-style cow skull. Having a little city to set on fire to keep you warm at night wouldn't be too absurd...

At least they didn't name it after Auschwitz.

I got a mailing from a jewelry company that put me in mind of this post. Pandora: Unforgettable Moments
Maybe I read too much, but all I can think of is the unleashing of horrible things on mankind. Companies really ought to do a little research before naming stuff.

There's a german company who had alleged ties to concentration camps that now makes kitchen appliances.

They wanted to call their new gas oven series the "Zyklon".

Likely an innocent misunderstanding, but...