Well, that's going to be expensive

The news running around the NRAAM is the bad luck that Charter Arms has experienced.

Seems that they contracted with Yellow Freight to ship the display gins of Charter Arms to Nashville. Somewhere betwixt and between, Yellow Freight has allegedly "lost" the shipment. 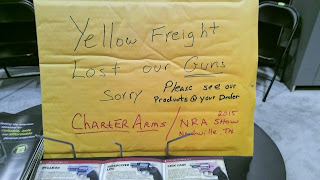 The reps at the Charter Arms booth inform me that every time they call Yellow Freight the story changes.

That tends to sound fishy to me, but it's not my County.

I asked the Charter people what price tag they'd hang on this, and they state they can't. Apparently the shipment contained several unique firearms, some with significant historical value.

Not to mention showing up at the NRA ANNUAL MEETING with this: 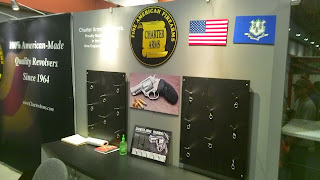 I'd say that someone at Yellow Freight is probably getting heartburn about right now.

LawDog
Posted by LawDog at 3:04 PM

I had a large, galvanized grate sent by a supplier via Yellow Freight years ago. After the fiasco of finally finding the shipment, getting it shipped from a thousand miles away, and dealing with lost production, I decided Yellow Freight wins the title of "Worst Freight Company Ever."

Sour note someone, somewhere has a lot of splainin to do an a bunch of ordnance to locate ASAP
Joyful note Lawdog is posting again, Halleujiah!
woerm/thr

This is what happens with union labor...(pardon, 'labour'). Whether through outright corruption or just general 'not my job' malaise, stuff like this becomes commonplace.

I had a fully assembled bicycle shipped to me recently. Huge shipping crate, impossible to misplace it, right? Well, instead, the shipping company misplaced the entire cargo trailer it was in! Luckily, they found it after 2-3 days, sitting at the local hub. It had gotten marked as 'empty' in their database when it was not empty.

I'm pretty much a fan of 'Never attribute to malice that which is adequately explained by stupidity', until it comes to firearms. Then I look immediately for the gun grabber, one who thinks they are doing the Lord's work and cannot possibly be fired for involving their organization in a massive, messy lawsuit.

"I'm pretty much a fan of 'Never attribute to malice that which is adequately explained by stupidity', until it comes to firearms. Then I look immediately for the gun grabber..."

Wow, I was tracking fine, nodding along to your first sentence, and then came the horrible sound of the needle scritching across the record as I went into full "Hu-wha?" mode.

That's like saying that, when money goes missing, you immediately suspect some religious socialist who hates filthy mammon to have taken it and burned it.

Maybe... and I know this sounds kooky since guns are only high value objects in demand in the criminal underworld... but just maybe they were plain ol' stolen.

Charter posted to their Facebook timeline earlier today that "the crate has been located."

When it absolutely positively has to arrive, send it UPS.
Geoff
Who is a professional paranoid.

Each carrier has regional divisions, and sometimes those divisions are appallingly bad in one locale, and spectacularly good everywhere else (and vice-versa). Your personal experiences with one division are no guarantee when you are sending something other than that specific region.

There have been tests done over the years by various organizations, effectively causing carriers to run races with eachother without the carrier's knowledge. The results are both amusing and in some cases alarming.

@Anonymous1: Uhm...you know what moat people's pet name for UPS is? "United Package Smashers"- oftentimes when you go brown, you get sh*t on you...