I really must learn to keep my mouth shut

When I was growing up, "bint" was a British slang word for a girl.

It is a loan-word from Arabic, where it is a patronym for "daughter" in the same way that "bin" is for "son".  "Azadeh bint Suleiman" would be "Azadeh, daughter of Suleiman".

In the 1975 movie Monty Python and the Holy Grail there is a scene where King Arthur is explaining to a group of peasants that he is King of Britain because the Lady of the Lake gave him Excalibur.

Which leads to an unruly peasant making the classic statement:  "Oh, but if I went 'round saying I was Emperor just because some moistened bint lobbed a scimitar at me, they'd put me away!"

Fast-forward to last week.  I am looking for a certain box of widgets that aren't where they're supposed to be, and during the search I am asked by an officer as to which candidate I intend to cast my vote for in the up-coming Presidential election.

I answer something along the lines of:  "Personally, I'm all for finding out who the moistened bint lobbed the scimitar at and give him the keys to the Oval Office."

I have found my campaign this year. 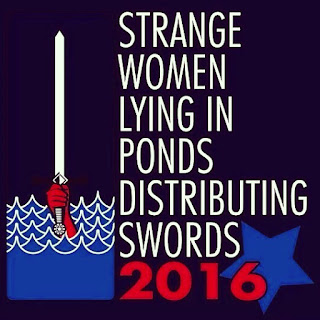 LawDog
Posted by LawDog at 7:48 AM

Heh. I can live with that approach.

Might be better than the never ending political circus which occurs every four years.

Beats the snot out of Socialist Sam or the former(current?) Sec. of Money laundering......

Hmm ... the Lady of the Lake for President? Or simply any candidate from Avalon?

Now I understand! A scimitar is just a sword that got bint!

I rather wish the moistened bint would through the scimitar - *hard* - at some of the current candidates.

Though I suspect you'd need to behead and stake some of the worst of the lot at a crossroads to be *really* sure they wouldn't come back.

You will be had up by the Un American Activities Committee for your British references ... see if you aren't! >};o)

that said make sure the moist bint throws those toadstickers really, really hard

'Dog, I discovered that one awhile ago, printed it out, & laminated it. I've had that mounted in the back windshield of my truck for 6 months or so.
--Tennessee Budd

This sounds like a political cause I could get behind!

Where do I get one?

The best part of kings being picked by inheritance was that quite often the job would land on someone who wouldn't have tried too hard to get it. When it failed was when either the heir was coincidentally the sort of power-mad bastard that would try to micromanage everything or conquer the neighbors, or more often when there was no direct heir, or the clear heir was non compos mentos. The last two situations allowed power-mad relatives to scheme with corrupt barons for the job - or else ask another king for the loan of an army - and all too often, the neighboring king was happy to lend a few troops for the sake of having a rival kingdom Fc*k themselves over in a civil war. But most of the time, there was no question about who was going to inherit the job, and it was someone who was going to try to arrange things so people would deal with their own problems and only bother him when it really couldn't be handled at a lower level.

In our system, the non-power-mad aren't even running (unless they're oddballs like Rand Paul). Worse, the most power-mad candidate is likely to win, simply because he or she will do things no person with a functional conscience would. And that's how we're going to wind up with a Trump (used to buying favors from governments, ego as tall as the Sears tower and as wide around as the Pentagon) vs Hillary (who capped a lifetime of corruption with security violations 10 times as bad as the last 10 guys to get prison terms for that).

One cabeat concerningthe moistened bint theory of leader selection; as I recall, Arthur had a "can't keep his dick out of the strange" problem even worse than Clinton's. I mean, so far as I can recall, President Bubba didn't boink relatives.