As a student of history, and as an observer of the American political process as a whole, I have been watching the increasing violence of your protests with some cynical bemusement.

First off, we're electing a President, and not a God-King.  No matter which of the -- quite frankly -- dismal prospects available in this election wins the Oval Office, at least some part of Congress is going to dig in their heels and do their level best to stymie anything that President does.

Near as I can tell, you idiots seem to confuse "President" with "King".  Maybe there's some psychological projection going on there, an unconscious desire for a benevolent King surfacing in your little hearts, or something, but without a majority of Congress backing him (and trust me, most of Congress hates Donald Trump almost as much as you do), the best a President can do is twiddle his thumbs for four years.

Yes, I know about Executive Orders.  I also know that Congress has multiple ways to pimp-slap an Executive Order across the Capitol (How many years has it been since the BATFE had an actual director?  Five?) from passing legislation that contravenes the Executive Order; going through holding back funding of the Executive Order, all the way to not confirming key people required (Hello, BATFE! How's that "Acting Director" thing working out for you?).

Second off, the country that survived the likes of Warren G. Harding, Andrew Johnson, and James Buchanan is going to survive this election cycle.  Get your Hanes out of the half-hitch, and breathe.

However, I would be remiss if I did not point out that the major effect of your little tantrum throwing is to irritate a large majority of neutral-leaning folks.  Americans are fairly predictable when it comes to getting annoyed -- they tend to do whatever it takes to annoy the people that are pissing them off.

Every time you hold up traffic -- some neutral voter who's being discommoded is going to decide to vote for Donald Trump just because it will upset you.

Every time you show up on the TeeVee screen pelting a little blonde gal with eggs -- someone watching is going to decide to vote for Donald Trump, just to whiz in your Post Toasties.

Every time you show your violent little arses on national TeeVee, voters who would have voted against Donald Trump are going to vote for him ... just to stick a metaphorical finger in your eye. 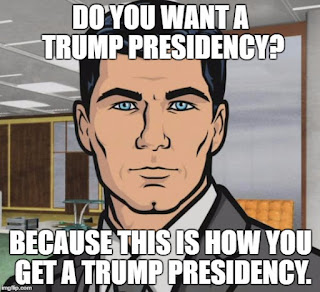 Not that I really give two hoots in hell either way, but someone should be giving you the warning that your parents and your teachers obviously skipped out in giving.

In a couple of weeks just chock-full of the suck, there is some good news.

Peter Grant, also known as Bayou Renaissance Man, who moved to Bugscuffle a short while ago with his lovely wife, has written a Western novel.

If you like the old pulp Westerns along the lines of Louis L'Amour or Zane Grey, you might give it a look.

He, and his publisher, are hoping to give the non-porn Western novel a shot in the arm.  Definitely worth the old college try, I say.

In similar news J. L. Curtis, who blogs as OldNFO (and whom also recently moved to Bugscuffle) has a military sci-fi short story up, which appears to have hit #1 in a couple of categories.  If you liked Armor by John Steakley, you'll probably like Rimworld: Stranded -- although understand that Curtis' protagonist is a boozy lifer tech-type, instead of the Combat Arms hero of Steakley's book.

In book news of my own, the work on The LawDog Files: The Dead Tree Edition is on temporary hold as I get another story out of my system.

Now, I'm off to do some writing.  Y'all try to hold off on the dying until I've had a bit of a breather, ok?