Friend Peter Grant over at Bayou Renaissance Man has a new book out.

A rubber stamp is not Due Process

One of the things being discussed around the tables at this years NRAAM are "Extreme Risk Protection Orders" (or "Red Flag Laws", if you want to be less overt about it.)

These are laws which allow for guns to be seized by law enforcement based on what seem to be subjective opinions about whether someone might be dangerous or not.

Indiana's Red Flag Law is being touted as the model for the nation (side note:  Indiana?  What the hell, Hoosiers?), based solely upon alleged "due process" protections for gun owners.

These "due process" protections involve a two-step process.  First,  judge has to find that probable cause existed for the initial seizure of the guns, if done so without a warrant.  A warrant would require review for probable cause before being issued.

Second, a hearing must be held within 14 days, where the subject can petition to get his seized guns back.

I put "due process" in quotation marks, because I have two questions that no-one seems to be able to answer.

The first is:  How many initial Red Flag Law warrants are turned down by judges for a lack of Probable Cause?  What percentage of warrant-less seizures of guns are immediately reversed by the reviewing judge upon initial review?

Second:  How many -- or what percentage -- of Red Flag law seizures are overturned at the 14-day hearing?

I suspect that the reason I can't answers to those questions is because the answer to both is under the margin of error.  And that is unacceptable.

Gentle Readers, if Indiana judges are rubber-stamping the seizures of lawfully-held guns no matter how piss-poor the probable cause for those seizures are, then "due process" is NOT being observed.

Indeed, due process by rubber stamp is nothing more than mockery of due process.

A week or so ago, a news article came across my news feed regarding some of the shareholders for Sturm-Ruger playing silly buggers.

So, when I hit the convention floor, I headed for the Sturm-Ruger booth to ask media-type questions.

Nobody at Ruger would go on record, but I got one of these little jewels: 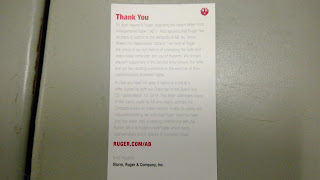 With the suggestion that I look at the letter at the URL at the bottom of the card.

Didn't really answer my question, though.

When I gently pressed, the Ruger rep assured me that the shareholder kerfuffle was a paper tiger, and nobody was worried about it.

I'm going to take them at their word, but I have to admit that I'm a little concerned by the new tacks the anti-gun folks are taking.

Thoughts from my first wander of the floor:

The average age of the attendees is younger than in the past conventions, and fitter.  While I'm still navigating around wheezing late-middle-aged gentlemen, there are a lot more fit, squared-away folks.

Is the NRA sponsoring a Crossfit club, or something?

Also, there are more un-accompanied women.  At the other NRAAMs I've been to, the majority of the lady attendees are obviously there with the Boyfriend /Husband /Spouse-Like Love Unit.  While most of them still are, there are a lot more moving around the floor by themselves -- including at least two ladies standing in line at booths with strollers in tow.

Speaking of which, I spoke briefly with a young mother at the Glock booth who is mildly annoyed that she had to pay someone to take the finger grooves off her Gen4 Glock 19 just before Glock came out with the Gen5. She was intelligent, articulate, and had more gun sense than most folks I've run into at gun counters.  If she, and others like her, are the future of the NRA ... we're in good hands.

I am happy to see fewer gun-bro t-shirts on my first swing-through.  Chesty "Cold Dead Snek" t-shirts may be satisfying to wear, but might not convey an image to attract more middle-of-the-road folks.

I'm off to chase down Tiny Purple Demon and give her some books. 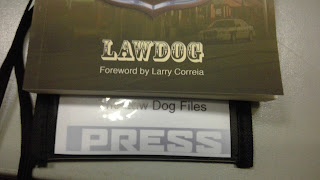 Yes, someone at the National Rifle Association actually gave me a press pass!  Mwa-ha-ha!

Initial impressions:  It is crazy here.  Of all the NRA Annual Meetings I've been to, this one is the most hectic upon first walking into the venue.

I suspect it may have something to do with the current political climate, but we'll see.

It also has the most police presence I've seen; although the officers I've spoken to have been the most laid-back and friendly.

I've spoken to one outside media type who seems to be neutral and open-minded -- he's a college kid -- and he actually seems to be seeing the Second Amendment side of things.  Kind of gives me hope.

Off to walk the floor!