Are you not entertained?

The subject I referred to in my last post was the man who got soccer-kicked in the head by a "mostly-peaceful protester" in Portland on 17 AUG 2020. Details can be found here.
Go to that link. Watch the video of an unresisting man, sitting the street as ordered by the crowd that yanked him out of his pickup, soccer-kicked in the head from behind. Listen to the crowd howl and snarl at him.
Let everyone you know see that video.
And, for the sake of various and sundry deities -- stay the hell away from those areas.
As for the Progressive Democrats: 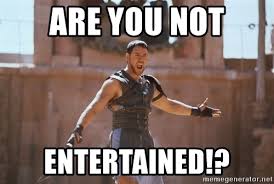 This is on you.
The "Progressive" mayor of Portland, with his mealy-mouthed kowtowing to "restorative justice", his refusal to even admit that the protests were getting violent, and his hamstringing of the Portland Police Bureau has fostered the atmosphere that led to this.
And the "Progressive" voters in Portland who put him in office, need to take a big, honking bite of the blame, too.
The "Progressive" District Attorney of Portland, with his list of freebie crimes that protesters will not be charged with after they brazenly commit them -- fostered the atmosphere that led to this.
And the "Progressive" voters that put that District Attorney in office -- they share in that blame, also.
To everyone else, I say:
Here is your free, three month trial version of rule by Progressive Democrats.  Portland. Seattle. Minneapolis.  All run by "Progressives".
You liking what you see so far? Are you enjoying the Twitter videos of "mostly-peaceful" rioters burning, and looting, and destroying, and terrifying everything they can get their slimy little claws on? Are you titillated reading the reports of the rapes, and the thefts, and the assaults, and the shootings inside their "peaceful" little Occupied Zones?
Are you not entertained?
The Democrat Party has bought into this "Progressive Democracy" lock, stock, and barrel. Some of them publicly approve of it.  Those that don't tacitly approve of it.
Might keep that in mind when you go to the polls in November.
Just saying.
LawDog
Posted by LawDog at 7:27 PM

It's almost like the population at large is completely ignorant of the past 103 years of history.

read that the guy died. but only from one source.

Stay out of the stupid. If you inadvertently get caught up in one, get out any way you can...

Like General Sherman's "mostly peaceful" march to the sea.

A Pogressive is a Socialist is a Communist is a Fascist. Any differences are largely cosmetic, and the similarities go to the bone.

Am I a bad person for daydreaming about an (entirely fictional) scenario wherein a van, upon being stopped by a howling mob of BLM thugs, suddenly opens its side-panel door to reveal a machine-gun nest with 10,000 rounds of 5.56mm NATO ammunition ready to rock and roll?