When George W. Bush became President, he was openly mocked -- anyone else remember "Chimpy McBushitler" -- brazenly disrespected, and political hacks made millions hoping he would fail.
To the cheers of the Left.
Then Barack Obama was sworn in, and suddenly ... 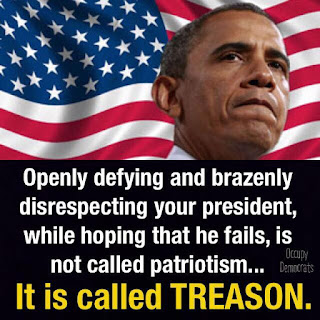 And the Left decided that anyone who treated President Obama the way the Left treated Bush was a traitor, and probably sub-human.
Well, as things do, President Obama left office, and Donald Trump was sworn in. And suddenly "Openly defying ... brazenly disrespecting .. hoping that he fails" not only stopped being "treason", but it took the religious fervor of the Bush years, and turned the knob to 11. 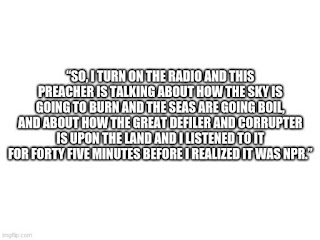 Seasons come and go, and all that, and now a Democrat is back in the Oval Office. And we're supposed to forget the riots -- not to mention the open defiance, brazen disrespect, and hoping for failure -- and make nice.

I would say that's rich, coming from people who spent four years of the Trump Presidency, and 8 years of the Bush Presidency, trying to tear things apart, and spitting upon the idea of "unity", but the Left -- like all other fanatical religions -- can't see their own hypocrisy.
Nah, y'all can take your "unity", fold it until it's all corners, and shove it up until you gag on it.
Nothing but the back of my hand to you.
LawDog
Posted by LawDog at 1:54 PM

Today at Noon, I lowered the Stars and Stripes and the Gadsen Flag and hoisted a Jolly Roger. At sometime in the future, I'm sure I'll fly Old Glory again. I'm a veteran and I love that old banner. But for at least the near future, I'm following the guidance from 2016: "Become Ungovernable!"

Agreed. The media's shrill protestations every time Trump went to the bathroom are a sharp contrast to the nauseating obsequiousness they display for Biden. Double standards are their stock in trade, and submission to power is the currency.

When clowns like Biden and his ilk use the word "Unity" what the mean is "Sit down and shut up, peasant".

Yeah, not so fast there Guido...

“ Nothing but the back of my hand to you.”

I’m going to use that line, often.

Ulises from the People’s Republic of Kalipornia

We stayed home, as usual. Couldn't fly our skull & crossbones because a huge wind tore down the flag pole.

I did play El Degüello nice and loud, though...

I'm seriously considering taking Old Glory and flying her upside-down for the next four years, because Lord knows, we're in some deep yogurt now. I'm sure the local harpies would be all over me, but I'm still considering it.

Here's to surviving the next four years.

Yeah, really sad. Told the wife we should fly our flag upside down. So sad that folks think the looks (or gender) of a person is qualification for the highest and second highest office of our fair country.

I will show the Thief in Chief all the respect they showed President Trump. Every last bit of it.

I'm not American, but the sentiment I'm seeing all over is bloody scary if you think about it. The election having so many red flags, the refusal to even consider investigating, and the complete lack of support the GOP gave Trump has a stunning number of people saying they've lost faith in the system completely.

I doubt there will be a USA in ten years. If Joe Biden can be "elected" no questions asked, I don't see any real opposition winning ever again. With some of the legislation I've read is coming, and the rhetoric now, I don't see how they're not pushing for massive unrest/civil war.

You are MUCH more polite than I am about that... Just sayin...

To: Everyone on the left and most of the establishment Republicans.

Do some actual thinking. Realize that supporting a man who was a rampant sexual abuser and overall crass and racially insensitive isn't the way forward.
The next generation is grown and we're realizing that the way y'all been running this show isn't right. Biden was elected by a huge coalition of voters, with many of them being young individuals who have been merely wanting a stable political presence who doesn't use twitter as a way to pit the nation against itself.

I know you folks don't think this way, but my generation actually gives a damn about people. Immigrants. Americans. All people. Not just the rich white ones.
This is just the beginning. If you seriously expect some sort of red backlash, I'm sad to say I think the entire country is finally realizing how insane you individuals have been. Say what you will about the left, but we've never stormed the capitol or threatened armed rebellions against state governments because we can't wear a small piece of fabric across our face. You lost any chance to claim that the other side was in the wrong when you actively threatened the lives of the entirety of our elected federal government.

The USA isn't going anywhere. We're just realizing that we're light years behind the rest of the modern world in terms of human rights. The ideas you decry as "communism" and "socialism" have been happening in other countries for years, and have worked wonders. Wake up you fools.

According to my late mother, that should have been "The back of my hand and the sole of my foot to you." ON the gripping hand, if you're going for "pistols for two, coffee for one" I'll be pleased to offer what services I may. Makes me wish I'd had £23,000 a few years ago when a matched pair of Mantons went on the block. Be safe, try to stay warm.

Bit late to the party, but I'll just say that when someone has repeatedly told me that he hates me and wants to see me dead, I'm inclined to take him at his word. Kinda makes the calls for "Unity" ring a bit hollow.

[Why, yes, Anonymous at 6:20 PM, I do read the comments your ilk leaves on Leftist op-ed pieces. Did you think I wssn't paying attention?]

I am a retired blogger from Israel(IDF),I have a new FUNNY/HUMOR blog: funnylinksblog.wordpress.com and I am interested in a Reciprocal Links with your great blog,if it's possible,please.I think Humor/Satire is important to people,anywhere,anytime,any blog,even in serious and political blogs or any stuff...Or to post any article or content or picture linked to my blog,anything you can think about.Thank you in advance.Best wishes,David,from Israel.