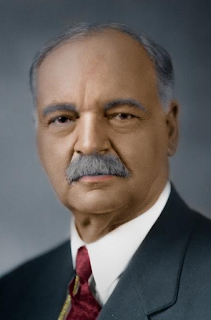 I'd like y'all to meet Charles Curtis. Born in the Kansas Territory in 1860, Mr Curtis was an enrolled member of the Kaw Nation, by way of his mother; and his first languages were French and Kansa.
A gregarious man, Mr Curtis studied law, and then found himself representing the State of Kansas in the United States Senate, until he was tapped to run as Vice President of the United States in 1928, winning quite handily.
He served as the 31st VPOTUS for one term -- his running mate was Herbert Hoover, and that didn't bode well -- and resumed his legal career after leaving politics, until passing away in February of 1936.
He was the first Native American to serve as Vice President; the first multi-racial person to serve as same, and the last unmarried person to hold that office.
History, kids. It didn't start in 1994.
LawDog
Posted by LawDog at 12:25 PM

What a fascinating man. I would love to have met him.

The one and only thing either can claim is being female, and I'm sure the Democrats are not about to allow that, not with their latest plan to make sure no women can succeed, what with all those trans sorts taking over women's sports, etc.

I wonder if there's a biography around for him? I'll go look!

Every day, I learn something I didn't know the day before. Cool.

Karla (ThreadBndr) said...
This comment has been removed by the author.
8:33 PM

Let's try that again without typos! His house is here in Topeka. Just kitty corner from the statehouse and it's currently for sale. I hope whoever buys it will maintain it and cherish the history.

My mom taught at a school which was named for him, and one of the state buildings is named for him, so I knew he was VP. But was not aware that he was Native American. Learn something new every day!

Dustbinned by Hoover; happened to a lot of good folks. Now I want to look up more about him. Thx.

I'm glad no one "impinged on the decorum" of the Senate too much, else they might have seen him pound for order with the blunt side of a tomahawk instead of the gavel. Dread Pirate Roberts' Rules of Order, and whatnot.